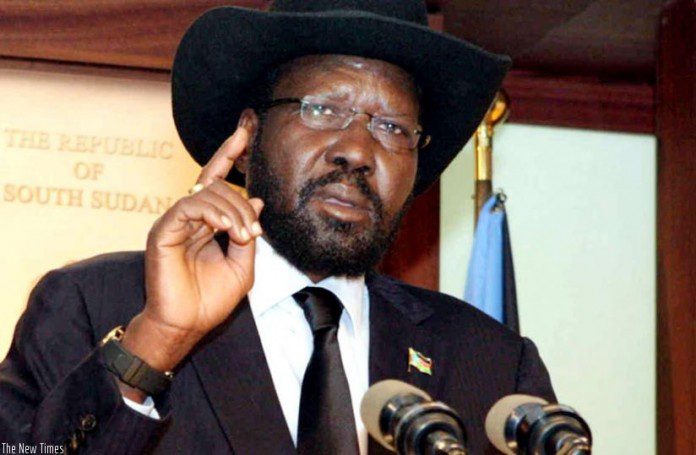 South Sudan President Salva Kiir on Wednesday urged countries in the region to continue supporting Juba amid pressure from the United States to reach peace agreement with rebels.

“For those who are not South Sudanese and they have interfered in our own affairs I want them really to realize their role. There are people who have helped us during the (liberation) war all our neighbors here helped us to fight effectively and I would like them also not to forget what they did to us, now if they get involved in a sinister way we would not be happy with them,” Kiir said on State radio in Juba to mark the army day of liberation.

South Sudan marks May 16, since it was the day when the Sudan People’s Liberation Army (SPLA) led by the late founder John Garang Demabior launched the struggle for liberation against the Sudanese government in 1983 in the northern Bor town of Jonglei.

Kiir called upon the rebel groups to lay down arms and negotiate with his government.

“We are now having our own people (rebels) who are fighting us. I am calling them to put the guns down and they come to the table to talk. Let us bring peace back to our country we will not bring it back by arms because it will take us long,” he said.

The U.S. and Britain recently expressed frustrations with the warring parties over continued delays on reaching peace agreement to end the more than four years conflict, and the U.S. also criticized South Sudan President for appointing General Gabriel Jok Riak who is indicted by the UN to head the SPLA.

The warring parties are set to discuss at the third round of peace talks on Thursday in the Ethiopian capital where they will be expected to reach final agreement.

“It is not easy to come to Juba by force of arms, even if you manage to come and kick out the current government that is now in Juba. The government also has its own supporters who are lying around, they may go back to these bushes that you (rebels) are using to come back and fight you,” Kiir said.

He also said the ongoing economic difficulty in the oil dependent country will be solved when peace is achieved with rebels, adding that it will be boosted by ongoing exploration for new oil wells amid international appreciation of oil price.

“It’s the war which has now brought this situation but we are hopeful that if the war stops the economy will improve. The oil production will increase because we are now working on how to discover new wells and to increase the oil production,” he said.

South Sudan relies 98 percent on oil to finance its fiscal budget but outbreak of conflict in December 2013 caused oil production to decline from 350,000 barrels per day to 160,000 bpd.
President Kiir said many people died when they were pursuing the right cause of liberation.

“I want to thank our martyrs who sacrificed their lives for the nation they did not enjoy. Let us work hard so that their sacrifices do not go in vain,” Kiir said. Enditem