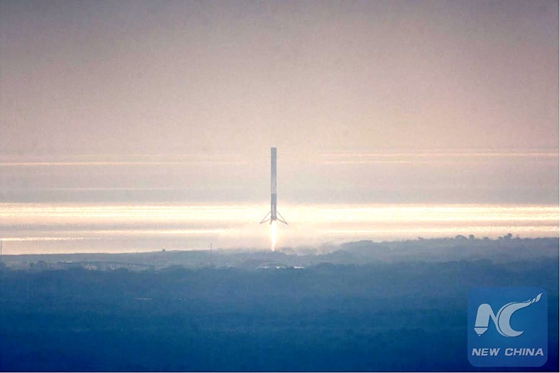 “Baby, came back,” SpaceX founder and CEO Elon Musk posted on Instagram Friday, along with a photo of the rocket landing on ground at LZ-1 on the Florida coast. [Photo/Xinhua]

The launch is the first from Launch Complex 39A (LC-39A) since the final flight of the space shuttle fleet in July 2011. LC-39A was best known as the launch site for the Apollo 11 mission, which sent the first humans to the surface of the moon, as well as numerous space shuttle missions.

About 8 minutes after launch, the California-based company successfully landed the first stage of its Falcon 9 rocket on ground again after launching commercial cargo to the International Space Station.

“Falcon 9 first stage has landed at LZ-1,” SpaceX then tweeted.

On Saturday morning, SpaceX aborted the lift-off in the last minute due to technical problem.

The rocket is being launched the company’s Dragon spacecraft into orbit carrying about 5,500 pounds of equipment and experiments to the International Space Station.

It’s the first SpaceX launch from Florida since a Falcon 9 exploded on the launch pad at Cape Canaveral Air Force Station on September 1, 2016.