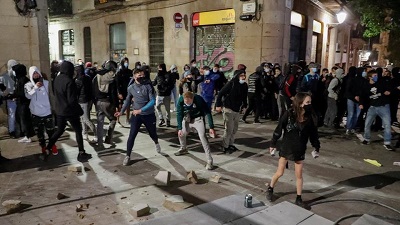 For a second night in a row, multiple cities across Spain were racked by clashes between authorities and people protesting the latest coronavirus control measures.

In Madrid, a peaceful demonstration on Saturday evening devolved into street fighting between small groups and police after it was broken up by officers, broadcaster RTVE reported.

Barcelona also saw renewed violent protests, which broke out after a demonstration against forced evictions. One person has been arrested.

The night before, 20 officers and seven demonstrators were injured in streets fights, mainly involving right-wing hooligans, according to police, resulting in 15 arrests.

Prime Minister Pedro Sanchez has warned that the protests characterized by “irrationality and violence” are unacceptable.

Spain has been one of the European countries hardest hit by the pandemic. On Thursday, parliament approved the extension of a nationwide state of alarm – the third-highest state of emergency – until May 9.

Multiple regions have shut themselves off to travel. People in Catalonia are not allowed to leave their town or city during weekends. Many cities, Barcelona included, have implemented night-time curfews.