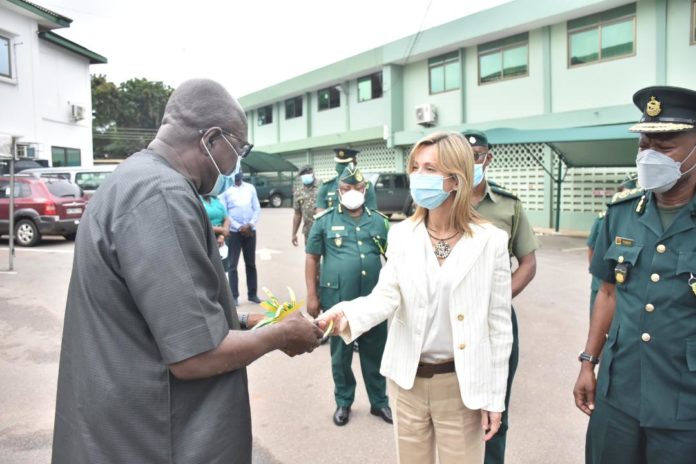 The Spanish Government has presented vehicles and Information Communication Technology (ICT) equipment to the Ghana Immigration Service (GIS) and the Ghana Police Service to enhance their operations.

The gesture, the Spanish Government said, was to support the Government of Ghana to manage irregular migration and other cross-border crimes.

She said irregular migration is a transnational challenge that needed to be tackled by countries of origin, transit, and destination.

She indicated that the donation was a demonstration of Spain’s commitment to strengthening the existing relationship between the two countries.

The Ambassador expressed the hope that the donation would contribute to the effective management of irregular migration flows, which has the tendencies of affecting the security and stability of the country.

“Migration will be productive and beneficial only if it is regularized in the spirit of shared responsibilities, mutual trust, and full respect for human rights, she noted.

Mr Ambrose Dery, the Minister of the Interior, said the presentation would complement the government”s efforts at resourcing State Security Agencies to ensure the needed internal peace, public safety, and social stability for national development.

He noted that cross-border crimes and irregular migration were better fought through international cooperation.

“I, therefore, welcome the commitment of the Kingdom of Spain to ensure humane and orderly migration as it benefits both countries, he added.

The Minister indicated that one of the key components of the cooperation between Ghana and Spain was the common interest of addressing irregular migration and human trafficking issues.

“In the year 2015, the kingdom of Spain granted an aid of €87,000 to support the GIS to establish a Migration Information Centre (MIC) at Tamale to help educate and sensitize migrants and potential ones in the Northern part of the country on the dangers of irregular migration and to travel safe and right”, he noted.

Mr Dery extolled Officers of the GIS for their commitment and dedication to ensuring security at the country’s frontiers, despite the numerous challenges they were faced within the fight against COVID-19.

He assured the Spanish Ambassador that the equipment would be put to good use for the effective migration management.

On his part, the Comptroller-General of Immigration (CGI) Mr. Kwame Asuah-Takyi, said the donation could not have come at a better time, since the Government of Ghana has reviewed its border strategy in the face of COVID-19 and other security concerns.

He noted that the Service has enhanced operational capacities of Officers to detect, prevent, and deter irregular migration.

He recalled that Officers had in recent times come under attacks by smugglers and other criminal elements, citing the example of an Officer who was injured during an exchange of gunshots at the Hamile area.

He, therefore, indicated that the logistics donated by the Spanish Government would enhance the Services operations and also boost the morale of Officers.