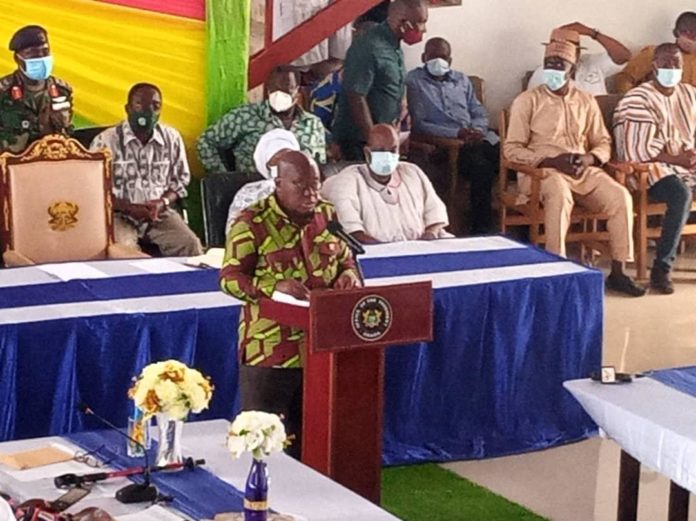 President Nana Addo Dankwa Akufo-Addo has urged chiefs to speak out and help the Government fight the ills in society, which include corruption, social and economic injustice, and illegal mining.

“As chiefs, you have the responsibility as ordained in the days of our forefathers to help preserve the sanctity of our lands, the purity of our water bodies and the health of our environment,” he said.

President Akufo-Addo made the appeal during a meeting with the Upper West Regional House of Chiefs in Wa as part of his two-day working visit to the Region.

Chieftaincy would remain an indispensable part of the nation’s history, which was why government had taken a lot of steps to strengthen the institution, he said.

“Government recognises that in order to achieve the success of the ambitious programme of social and economic transformation put before the Ghanaian people, we have a lot to do in terms of incorporating the traditional role of our chiefs into the modern constitutional set up, under which our country is governed,” he said.

President Akufo-Addo said it was for that reason that government fulfilled 100 per cent of its pledge in 2016 to increase the monthly allowance of chiefs and the quarterly budgetary support to the traditional councils and houses of chiefs.

He said government was also assisting the codification of the traditional roles and rules that had guided communities throughout ages and the digitisation of the records of the National House of Chiefs, particularly records in the National Register of Chiefs.

The President, however, expressed worry over chieftaincy disputes, which had been one major bane affecting the nation’s socio-economic development, sometimes resulting in fully blown conflicts that threatened the nation’s peace and stability.

That, he said, also caused destruction to property and loss of lives, leading to closure of educational institutions and health facilities as well as separation of families, among other things.

To stem the effects, President Akufo-Addo said government, through the Ministry of Chieftaincy and Traditional Affairs, was ready to provide the funds to increase the number of sittings of the Judicial Committees of the Regional Houses of Chiefs to hasten the adjudication of pending issues that continued to generate tension.

Issues of land administration continued to be a major problem affecting the development of the economy mainly as a result of dishonesty in land dealings, the President said.

“As trustees of lands on behalf of the people, I entreat you to help government streamline the administration of lands in the country leading to an efficient and well-functioning regime of titling, fixing of boundaries and ownership traits,” he said.