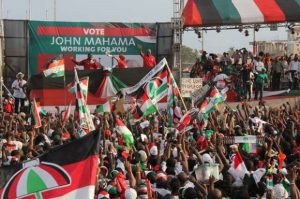 Almost all the handing-over notes from the outgoing government of the National Democratic Congress (NDC) to the in-coming administration of the New Patriotic Party (NPP) are ready, Mr Julius Debrah, Chief of Staff at the Presidency announced, on Wednesday.

The announcement was in apparent reaction to comments by Mr Mustapha Hamid, the Spokesperson for the President-elect’s Transition Team that the outgoing Government had not handed over any notes to the incoming administration, contrary to the Transitional Act 2012.

He cautioned the spokespersons of the transition teams to switch from a campaign mode as serious governance business begins.

“I also want to draw the attention of the spokespersons of the two camps…it seems some people want us to continue with the campaign mode but since we are shifting from campaign mode to governance mode, as much as possible, we should try and control what we say so the transition does not veer off,” the former Local Government Minister added.

She the notes were ready before December 7, the date of the general election date.

The statement also said the Government expected the transition process to be completed before January 7th, 2017, the formal handover date for the incoming government.

It is to do this by forming various sub-committees that would be responsible for different aspects of the process of the transfer of power.

The law provides for the establishment of three specific committees – The Inauguration sub-Committee, the Government Machinery sub-Committee and the Presidency sub-Committee – and any other committees the transition team considers relevant for the performance of its functions.

The outgoing Foreign Affairs Minister, who is also the Spokesperson for the Government’s Transition Team stated, “The process of transition will be completed before the formal handing over to the incoming administration on the 7th of January 2017, however, if there are any matters that still need to be addressed the members of the Government’s transition team will be available for further discussions.”