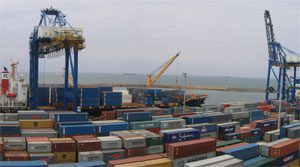 Reviewing the operations of the MPS Container Terminal, the executive delegation toured the existing facilities where they commended the management of MPS for the excellent operational performance.

They were also impressed about Tema Port’s steady volume growth and the throughput volume handled for the month, despite February being a shorter month.
The executive delegation subsequently assured the Chief Executive Officer and management team of MPS of their respective shareholders continued support in investing in both human resources and technology to boost the terminal’s operational levels, which already ranks among the highest in Africa.

On the tour of the port expansion works, the team expressed satisfaction with the progress of work thus far.

The construction of the 3.85 km quay has gone 700 meters deep into the sea with 3 vessels operating on drilling, blasting and dredging to expedite work to meet the deadline. The expansion works which began in October 2016, is expected to be completed and opened up for operations by the fourth quarter of 2019.

In a related development, the delegation paid a courtesy call on President Nana Addo Dankwa Akuffo-Addo at the Flagstaff House on Thursday, where they congratulated him on his ascension to the highest Office of the land and lauded him for his resolve to lead the country into a ‘new era of business development’.

The global Chief Executive Officer of APM Terminals, Morten Engelstoft on his part observed that, motivated by the President’s vision, they were ready to partner Ghana.

“This project will make Ghana an economic giant and enhance its position as the maritime hub in the sub-region; a world class terminal plays an important role in Ghana reaching its growth ambitions,” he said.

“I am proud to join hands with my partners APM Terminals and the Ghana Ports and Harbour Authority as we move along this promising path. Together, we are building one of the largest deep-water ports in West Africa,” said Mr. Cyrille Bolloré, Chairman of Bolloré Transport & Logistics.

He stated that he was pleased by the vision and determination of the President to make Ghana an industrialized nation and to increase the wealth and prosperity of all Ghanaians.

Briefing the gathering on the advancement of the expansion, the Chief Executive Officer of MPS, the executing contractors of the project, Mohamed Samara said the port expansion project was part of the Ghana Ports and Harbours Authority (GPHA) Master Plan for the development of the Tema Port under the concession agreement that was granted in 2004.

In addition to the Port expansion project, he said, a concession (Design, Finance, Build, Operate and Transfer) to upgrade the Accra-Tema Motorway into a modern, six-lane highway with improved arterial roads was being discussed with the Ministry of Roads and Highways. That project, he added, the MPS Shareholders will solely sponsor the project finance.

President Akufo-Addo on his part reaffirmed his stance on providing an enabling environment for the private sector to thrive so as to achieve a quantum leap in economic growth and development.

He was therefore pleased that companies such as Bolloré Transport and Logistics, APM Terminals had considered Ghana as a place to do business and also expressed his full support for the project.

“If we can convince more and more companies like yours to invest in our country, then we can thrive as a nation. Be assured that the presence of a new government does not mean the abrogation of genuine contracts entered into by the previous government. You have my support to proceed,” President Akufo-Addo added.

The expansion of the Tema Port will see the addition of four new deep water berths, breakwater and access channel to be able to accommodate larger vessels with high capacity equipment and an accompanying container handling yard.