Under the radar screen, one persistent New Yorker persuaded the government of Equatorial Guinea to take chance and fund a five-thousand mile solo transatlantic row. A feat he failed three times before, nearly costing his life. 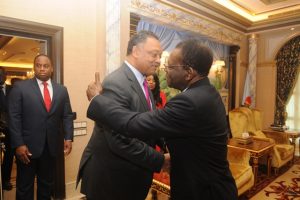 Victor Mooney, set off from Las Palmas, Canary Islands on February 19, 2014, which is off the coast of West Africa and amazingly arrived at New York’s Brooklyn Bridge twenty-one months later. Unknowingly, the adventurer would cast a shining light on the unprecedented development of Equatorial Guinea. This feat, a first for an African American, has propelled endless opportunities for Equatorial Guinea to re-engage with African-Americans in the United States.

His route would follow the infamous Middle Passage, a stage of the triangular trade in which millions of Africans were shipped to the New World as part of the Atlantic slave trade. According to historians, the enslaved people were warehoused, shackled, fattened, branded and priced for sale, then endured a lifetime of servitude. Thousands died during the Atlantic crossing.

This week, after His Excellency, Teodoro Obiang Nguema Mbasogo overwhelmingly won re-election for another seven year Presidential term, a United States delegation headed by Rev. Jesse Jackson, was first to congratulate the leader.

The tiny oil-rich country has a taken a page from the US State Department Sports Diplomacy initiative to debunk lies that promulgate about the countries leadership and direction. Before, in some circles, it was taboo to be associated with Equatorial Guinea.

People are seeing for themselves that Equatorial Guinea path to an emerging economy is being realized through His Excellency, Teodoro Obiang Nguema Mbasogo, Horizonte 2020 Development Plan.

Most of the critics of Equatorial Guinea have never visited the country or a small group of disgruntled nationals living abroad, added Mr. Mooney.