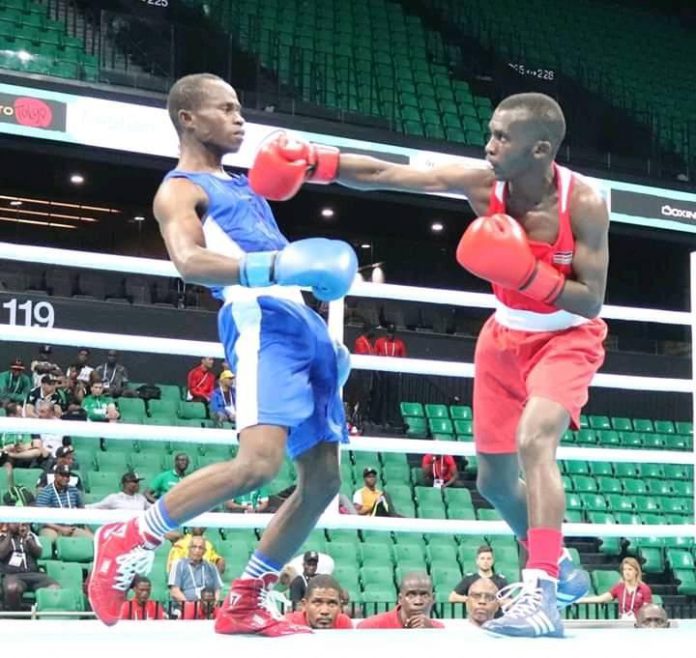 The Sports Minister, Hon. Mustapha Ussif on Saturday presented US$1,000 to the 2020 Olympic Games bound Black Bombers when he paid a historic visit to their training camp at the Trust Sports Emporium in Accra.

He revealed his love for boxing with former WBA Champion Ike ‘Bazooka’ Quartey as his idol with a promised to make the Bombers content and said all their grievances will be considered.

Hon. Mustapha Ussif promised them massive support from the President, HE Nana Akufo Addo as his heart is on Team Ghana and wished them success.

According to head coach Ofori Asare this is the first time in many years that a Sports Minister has visited them while preparing for a major international assignment to raise the flag of Ghana.

He pleaded with the Minister to be a friend of boxing and establish some acquaintance as they are poised to make themselves and the nation proud.

The three boxers who have qualified, Sulemanu Tetteh, Samuel Takyi and Shakur Samed beseeched with the minister to support them financially, spiritually and morally so that they will have the motivation and encouragement to win medals at the Tokyo 2020 Olympic Games.

They recounted their experiences before the African Qualifier in Senegal where they were stranded until the Ghana Olympic Committee (GOC) supported them to be able to get accommodation and participate where most of them passed the quarter final stage.

The Bombers asked for their qualification bonuses and incentives that will make them die for the nation.

The President of the Ghana Olympic Committee, Mr. Ben Nunoo Mensah thanked the Sports Minister and assured him that looking at the preparations and seriousness, Team Ghana will surely excel at the Games.

Present were the GBF President Mr. George Lamptey and his vice Samed, Consultant of the Trust Sports Emporium Nii Okai Nunoo, Physiotherapist Okyere Baffour Agyei, other members of the Black Bombers team and the assistant coaches.

The Minister toured the Sports Emporium to see the facilities there, such as the Bukom International Pool, Bukom Physio Center, Mudor Conference Hall, Ga Mashie Sports Hall, and the Bukom Boxing Arena.

Twellium Industrial Company were there to deliver some of their assorted products to Team Ghana, as promised when they signed the two year GH200,000 deal to become the Official Water and Beverage Sponsor of the GOC.