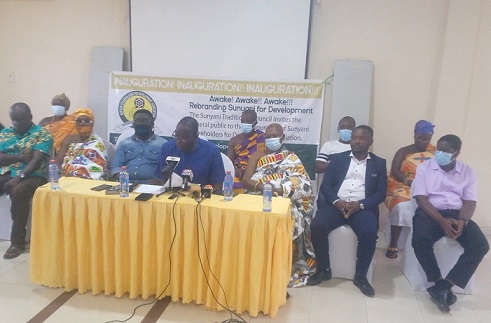 The Sunyani Stakeholders for Development Association (SSDA) and the Sunyani Traditional Council (STC) have appealed to the government to take legal action against encroachers of the Sunyani airport land for speedy completion of the airport’s rehabilitation project.

That, according to them would pave way for speedy completion and safe operation of the airport for socio-economic development to thrive in the Bono Region because the land was heavily encroached and therefore brought the rehabilitation works to extend and expand the run way to a halt.

The appeal was made in Sunyani at a news conference organised by the Association and jointly addressed by Nana Kwaku Sarbeng II, the ‘Akwamuhene’ of Sunyani Traditional Area and Ambassador George Kumi, the Chairman of the Association to complain about the snail pace of development of the Sunyani Municipality.

In his address, Nana Sarbeng II bemoaned the undue delay in completing the rehabilitation project was affecting more convenient, safer and faster travel between Sunyani-Accra, Kumasi and other parts of the country.

The situation, according to him had become a disincentive to economic activities and business growth in the Sunyani Municipality.

Nana Sarbeng II stated “the airport’s land was acquired as government property many decades ago, so if encroachment is affecting progress of intended purposes and hindering holistic national development, the law must take its course”.

He stressed “if the law calls for demolishing with or without compensation, the STC would not hesitate to fully support government in that regard because one’s selfish interest must not be an obstacle to impede development of the Bono Region and Ghana in general”.

Ambassador Kumi explained the rehabilitation project started in 2019 but had not been completed while upgrading other airports in the country to international standards were progressing in earnest with new ones being constructed in other regional capitals.

He said “the strenuous and hazardous mode of commuting by road from Sunyani to Accra makes it imperative for authorities to ensure the airport is readied for use without further delay.

“We the chiefs and residents of Sunyani will like to know whether we may have to organise communal labour to assist in getting the airport operational”, Ambassador Kumi added.

Touching on uncompleted projects that were neglected over the years, he cited rodents and reptiles had taken over the Centre for National Culture building in Sunyani because the project was abandoned for more than 50 years now.

Ambassador Kumi lamented “that project remains uncompleted, but those in other regions commenced during the same period were completed and in use”.

He said the Sunyani children’s park had no facilities on site to make it useable, stating previous governments only made vague promises to develop it.