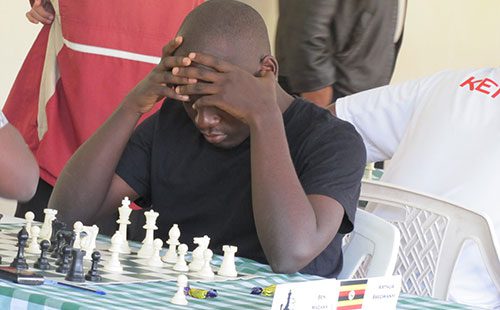 He will lead Uganda?s charge at the continental competition to be held in Kampala, April 17-26.

Ssegwanyi finished level on 6.5 points with Harold Wanyama and Haruna Nsubuga at the qualifying event that ended in Kampala over the weekend.

But Ssegwanyi won the event because of a superior tie break.

The top three are joined by Mathias Ssonko who finished fourth with 6 points and International Master (IM) Elijah Emojong.

Daniel Bagaadde and Raphael Buti missed out after tying with Ssonko at 6 points due to an inferior tie break.

Patrick Kawuma and Bob Bibasa crashed out with 5.5 points and 5 points respectively despite a good start.

Top female player Phiona Mutesi struggled during the qualifiers and missed a spot on the team to Nakimuli due to an inferior tie break.
Uganda Chess Federation president Vianney Luggya said that hosting the competition in April will cost the body sh65m.

The official said that 10 countries are set for the championship.

We expect to have 6 men and women in each team,? Luggya stated.