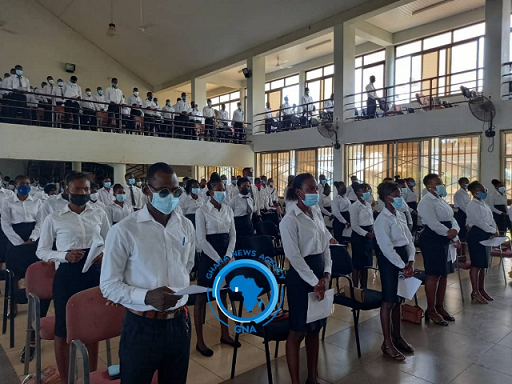 The St Francis College of Education (FRANCO), Hohoe has held its 14th Matriculation ceremony for a total of 568 students into the various four-year degree programmes of the School.

The ceremony is to receive “freshmen and women” into the College, an affiliate of the University of Cape Coast, making them full members of the College as persons in “Statu pupillari.”

The College received a total of 1,122 applications from qualified students and 856 were admitted while 568 accepted the offer of admission and were matriculated for the 2020/2021 academic year.

The College Secretary also noted that matriculation conferred full membership of the institution of the participating candidate, having fulfilled all necessary requirements adding that “every matriculated student is entitled to all rights and privileges recognised by the College authority.”

He noted that each batch of new students had to deal with the ramifications of the global COVID-19 pandemic with their concomitant effects in their socio-educational life on campus and added that the students were adhering to all safety protocols resulting in the College not recording any case since academic activities resumed.

The students took the matriculation oath and declaration of obedience to “study diligently, and to conform to all Statutes, Regulations and Rules” while promising to exhibit Christian dignity and simplicity, be honest and polite at all times and to show respect to the Principal and staff members.

They further promised to “uphold the vision and mission of the St. Francis College of Education, Hohoe namely; academic excellence, spirituality, morality and service to society.”

Mr Raphael K. Kwashie, Principal of the College, said the matriculation ceremony provided the opportunity for fresh students, who have gained admission into the various programmes offered in the College as junior members of the College community.

“The ceremony is also significant because it provides the opportunity for you, matriculants to pledge your allegiance to the authority of the College through the administration of the matriculation oath.”

He said the matriculants were expected to sign a bond to be of good behaviour and to subject themselves to the authorities of all in whom authority had been vested in the College.

Programmes offered by the College include B.Ed (Bachelor of Education) Maths and Science, B.Ed Maths and ICT, B. Ed Social Studies, B. Ed English and Ghanaian Language, B.Ed RME and Music, and B. Ed Primary Education.