The St. Theresa’s Hospital in Nandom in the Nandom District of the Upper West Region is celebrating with pride 50 years of excellent quality health care delivery in the country. 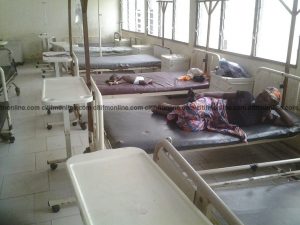 The hospital which was opened to patients in 1966 passed through thick and thin and has transformed into a centre noted for providing excellent quality health care services to the people of the Upper West Region, other parts of Ghana and neighbouring Burkina Faso.

It was therefore not surprising that the hospital was adjudged the best performing hospital in the 2016 annual peer review of all hospitals and polyclinics in the Upper West Region.

St. Theresa’s Hospital also produced both the best medical doctor and the best nurse in the year under review; a feat staff of the hospital took pride in as they celebrated the 50th Anniversary of the facility.

Dr Robert Amesiya, the Medical Superintendent of the Hospital paid glowing tribute to the souls of the missionaries and others behind the establishment of the hospital, which through sacrifices and hard work had become a centre of excellence in health care delivery.

“Our determining priority is to provide health care at the most convenient effective and efficient level to all manner of persons without discrimination”, he stated.

Dr Amesiya noted that through collaborations, the hospital had been able to complete a befitting entrance gate, a maternity block, a statue of St.
Theresa with a theatre now in use.

Most Rev. Richard Kuuia Baawobr, Catholic Bishop of the Wa Diocese lauded the hospital for its numerous achievements, noting that health was one key sector where the state and the church had always joined efforts and resources for the good of humanity.

He noted that there was an established awareness that the smooth and effective operation of health systems was critical to achieving both national and international health goals, adding that collaboration in this field was even more urgent considering the fact that providing efficient health services went beyond the means of any single partner.

Mr.Amidu Issahaku Chinnia, Deputy Upper West Regional Minister congratulated the management and staff of the hospital and the church for their selfless sacrifices to the people of the region.

He said government was determined to revamp the National Health Insurance Scheme (NHIS) in addition to the restoration of the nursing trainee allowances.

Mr.Chinnia revealed that government got clearance to employ 11,000 health trainees who graduated between 2012 and 2016 and also engaged 181 Doctors who completed their housemanship seven years ago in order to address the challenge of inadequate staffing at health facilities across the country.