Stakeholders in Awutu-Senya District have been urged to be ambassadors of the COVID-19 vaccination exercise, which kicked off in the District on Tuesday.

Mr Stephen Kwame Quaye, the acting District Chief Executive, who made the call at the launch of the vaccination campaign at Awutu Bereku urged the residents to go for the vaccination to protect them and others from the virus.

More than 10,000 residents in Awutu-Senya and Awutu Senya East in the Central Region are expected to take the vaccine in the first phase of the exercise.

The two districts were identified as the epicentres of the coronavirus in the Region.

They are among the 43 selected districts earmarked for the first phase of the exercise nationwide.

Some frontline staff of the Assembly and the District health directorate received the first jab of the COVID-19 vaccine after the launch.

“We are not in normal times,” the DCE said and emphasized the need for the people to eschew the negative perception about the vaccine.

“The vaccine is safe and efficacious,“ he assured and urged them to strictly observe the laid down protocols to safeguard themselves even after vaccination.

The District Health Directorate had trained about 40 health personnel to administer the vaccine at four vantage points in the district. 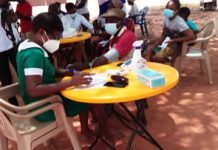