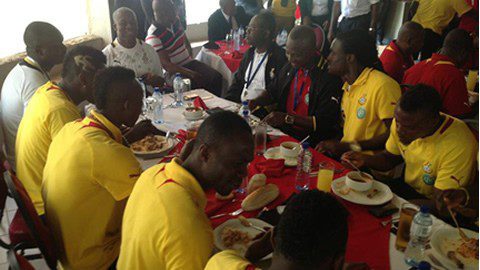 Black Stars having a meal

Sports Minister Elvis Afriyie Ankrah has hit back at reports that about $30,000 has been budgeted for to buy foodstuffs for the Black Stars during the 2014 World Cup ? describing these reports as unfair and disrespectful.

The state has approved $9.8m for Ghana?s third successive campaign at the World Cup finals this June in Brazil.

Reports were however rife that $30,000 was the estimated figure budgeted for to buy foodstuff to prepare meals for the Black Stars team throughout their stay in Brazil for the World Cup.

Sports Minister Elvis Afriyie Ankrah in his response to these reports in an extensive interview with Power FM said: ?And assuming it was true, what is the problem with that? The players shouldn?t eat or it is too much??

?If you consider that they are going to be away for over a month if you add something to it you are talking about a minimum of six weeks.

?And when we travel we have our own chef that cooks for the players.

?If they were going to buy just food from the restaurant, I can bet you that for that period it will cost not less than a $100,000.

?So even if it is 30 whatever, for them to get their healthy apem and kontomire and yam and light soup that will make them strong, what is the problem with that?

?In my view $30,000 for foodstuff for six weeks for a whole team, technical team and officials?.we should not disrespect our players to that extent, it is not fair.?