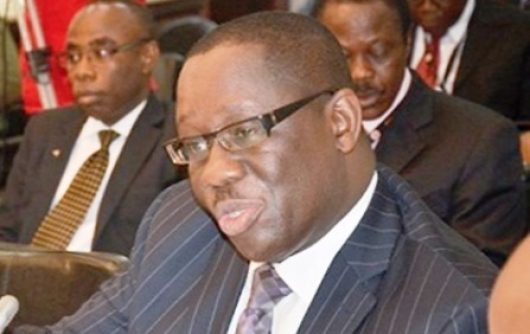 The State is amending charges against Ernest Thompson, former Director-General of the Social Security and National Insurance Trust (SSNIT), and four others, accused of willfully causing financial loss to the State in connection with Operating Business Suite (OBS Contract).

Thompson and his four accomplices are said to have caused a loss of over $66 million in an OBS contract, which sought to provide a state-of-the-art pension administration system to the country.

They have all pleaded not guilty to the charges.

The Supreme Court on March 17, this year, ruled that charges preferred against Mr. Thompson and four others by the State were inappropriate and same did not meet constitutional requirements.

According to the DPP, “We have look at it and we are now amending the charges on causing financial loss to the State. If we can be given two weeks, we can file the amended charges.”

Mr Samuel Cudjoe, counsel for Thompson said he had just received the Supreme Court judgement and he prayed that they should be given adequate time to study the new charges.

The matter has been adjourned to April 22.

The five were earlier variously charged with 29 counts of conspiracy, wilfully causing financial loss to the state and also contravention of the Public Procurement Act.

They have been admitted to self-recognisance bail by the court.

The facts are that in June 2010, SSNIT developed an Information Communication Technology (ICT) Strategic Plan to reflect current changes in its operational processes and conform to new trends in the ICT industry.

The prosecution said the plan envisioned the development and implementation of new software solutions as Operational Business Suite (OBS) to provide state-of-the-art pension administration system on a turnkey basis for SSNIT.

It said SSNIT advertised for International Competitive Bidding in the media for the development and implementation of the project.

According to the prosecution, although an entity described as Perfect Business Systems Limited (PBS) did not participate in the bidding in November 2012, the contract was awarded jointly to Silverlake, a Malaysian IT solutions provider and PBS purportedly as a consortium at a contract sum of $34,011,914, inclusive 14 per cent contingency and 17.5 per cent Value Added Tax.

The prosecution said the objective of the project was to automate all the core processes in the implementation and integrate all internal systems, as well as external stakeholders of SSNIT.

It said the contract, which covered SSNIT head office and branch offices, totalling 55 sites, were to be completed within 18 months.

“The project included the supply and installation of hardware and software development, data conversion and migration, as well as system integration of all components and maintenance support.”

Contrary to the terms of the contract, the Attorney General said, Thompson, Juliet and Afaglo caused payment to be made by SSNIT to PBS for items which were already covered by the contract sum, thereby “ballooning” the contract of $34,011,914 to $66,783,148 through what was termed variously as “Change Orders” and “Variations”.

The prosecution recounted further that the so-called Variation or Change of Order were carried out at the instance of Thompson, Mensah, Juliet and Afaglo.

She said Thompson authorised some payments which were above his threshold as Director-General and contrary to the Public Procurement Act.

The Prosecution said on January 15, 2016, SSNIT entered into a Service Level Agreement (SLA) with the so-called consortium (PBS/Silverlake), represented by Juliet, in the sum of $2,570,967 per annum for maintenance and warranty for three years.

The prosecution said although the maintenance and warranty agreement was executed in 2016, payment started from September 2014 when no service had been rendered at that time.

The payments were made contrary to the terms of the OBS Contract and also the advice of Corporate Law Manager against the payment, resulting in an unearned two years’ payment of $5,141,905.66 by SSNIT to the ‘Consortium’ through Mensah.

The prosecution said Hayibor witnessed the signing by Thompson in the SLA.

According to prosecution, investigations established that OBS system did not perform as contracted, but Thompson gave authorisation for the various payments, resulting in the loss of these amounts.

The prosecution said further investigations also revealed that Juliet purportedly represented a non-existent PBS company, adding that she had no capacity to represent Silverlake.

In the case of Afaglo, the prosecution said in applying for employment at SSNIT, he submitted and relied on certificates and educational qualification he did not possess.

“Based on those fake certificates, he gained employment at SSNIT as the General Manager of MIS on October 1, 2015.”

The prosecution said Afaglo’s certificates which he claimed to have been obtained from Georgia Institute of Technology and University of Cincinnati were not genuine.