The Special Adviser of the Secretary-General on the Prevention of Genocide, Adama Dieng, expressed grave concern at the continued level of violence in several areas of South Sudan. “President Salva Kiir has made a commitment to end the violence and bring about peace, yet we still see ongoing clashes, and the risk that mass atrocities will be committed remains ever-present,” said the Special Adviser. 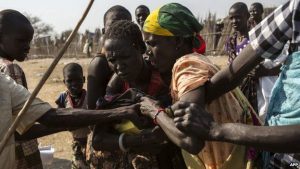 The peace process has yet to be accompanied by a complete cessation of hostilities, undermining the likelihood that the National Dialogue proposed by the Government will be seen as credible.

More than 52,000 South Sudanese fled to Uganda in January alone, coming primarily from areas in and around Yei, Morobo, Lainya and Kajo-Keji. Some 24,000 arrived between 25 and 31 January, of which 4,500 arrived in a single day, on 28 January. Many have given accounts of the killing of civilians, destruction of homes, sexual violence, and looting of livestock and property, and cite fear of arrest and torture.

The Special Adviser is particularly alarmed at the situation in Kajo-Keji, Central Equatoria, (south of Juba), where civilians have fled in fear of violence en masse. The access of the United Nations peacekeeping mission to and around Kajo-Keji has reportedly been restricted despite the serious security situation, as peacekeepers were initially blocked from accessing the area.

The freedom of movement of residents has also reportedly been limited. Some have reportedly been instructed to leave Kajo-Keji. Others who fled their homes and moved towards the border area between South Sudan and Uganda were reportedly intercepted by government forces. Those seeking refuge report using a number of informal border crossing points to enter Uganda, as armed groups are preventing the use of major roads, forcing them to travel through the bush often without access to food and water.

More than 52,000 South Sudanese fled to Uganda in January alone, coming primarily from areas in and around Yei, Morobo, Lainya and Kajo-Keji

Various areas in the Equatorias, among other regions, have been similarly targeted, and some 20,000 people were displaced from Wau Shilluk in Upper Nile in the last week, following violence that left many without emergency health care, safe drinking water, food and shelter.

In November 2016, the Special Adviser drew attention to the dire situation in Yei River State, following his visit to Yei River town, where credible information suggested that a scorched earth campaign was underway, targeting suspected opposition members and civilian communities believed by authorities to be their supporters. He reported the expulsion of farmers from their land, looting of property and burning of villages, as well as brutal violence against civilians.

Despite extensive discussions in the United Nations Security Council in November and December 2016 on a proposal to impose an arms embargo on South Sudan and increase targeted sanctions, agreement was not reached on either proposal. In the meantime, weapons have continued to flow into the country.

In the margins of the January 2017 African Union Summit in Addis Ababa, Ethiopia, the African Union, the Intergovernmental Authority on Development, and the United Nations in a joint statement expressed their deep concerns over the continuing spread of fighting and risk of inter-communal violence escalating into mass atrocities. “If South Sudan is to achieve peace,” the Special Adviser affirmed, “all belligerents must urgently cease hostilities and invest in the peace process to settle their differences, before the territorial fragmentation and destruction of the social fabric of this young country become irreversible.”