William Kojo Johnson, known in showbiz as Stay Jay, has responded to claims made about him in Amerado’s recent Juju song.

The song which features one of Ghanaian finest comedians, Clemento Suarez, who posed as the “Juju Man” Amerado had gone to meet for help.

In a bid to convince Amerado to believe in him, Clemento Suarez who named himself Mallam Shatta revealed a couple of secrets in the song that his “fake” juju powers have helped talented artistes likes Stay Jay, Yaa Pono, Dr Cryme, etc to blow in the game.

Stay Jay then clapped back real quick at him with a reply on Instagram that Clemento Suarez was using his name for hype in other to deceive people. Stay Jay also mentioned other celebs like Dr Cryme and Opanka.

Although it’s all jokes, he stated emphatically that Mallams are fake and it’s only God that has helped him. 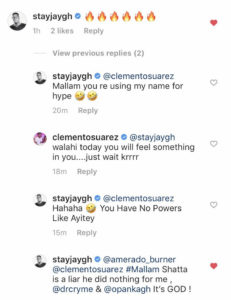 Check the replies and watch the official video below: