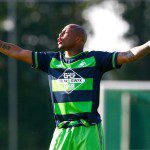 Ex-Ghana captain Stephen Appiah believes his compatriot Andre Ayew will be an instant hit at Swansea City due to his style of play.

Appiah is confident the playing style of the 25-year-old will suit the English game, predicting a successful tenure for the Ghana international.

And the retired former Ghana captain has tipped the highly-rated winger to excel in England.

?Swansea play good football and Andr? likes playing good football. He runs a lot as well, so I think he is going to do well at Liberty Stadium.

The Ghanaian is expected to be key for manager Garry Monk ahead of the start of the new Premier League campaign on August 8.