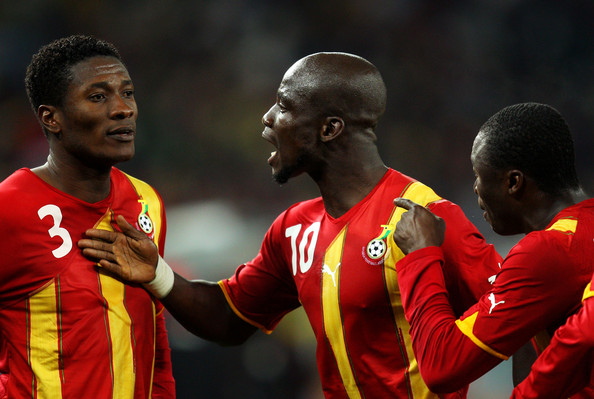 Former Black Stars captain Stephen Tornado Appiah has revealed for the first time, what transpired between him and Asamoah “Baby Jet” Gyan during the quarterfinal match with Uruguay at the 2010 World Cup in South Africa.

Appiah broke his silence on the incident during discussions on Max TV with Yaw Ampofo Ankrah and Sitso Atsrim during the maiden edition of the Black Stars Classics (World Cup edition).

The former Juventus star insisted that he did not have a bust up with Gyan as the photo may have suggested but rather, he was desperately trying to give instructions to Gyan when the referee…….. blew for a penalty instead of a goal after a handball by Luis Suarez .

“No, I was not angry with Gyan, I was rather angry with the referee (Olagario Benquerenca from Portugal) and I was telling Gyan to take the ball and place it at the center circle but the vuvuzela noise in the stadium made it impossible for him to hear me and that was my frustration.

Appiah said the handball, red card and penalty all happened so quickly that there was no time to recover for the penalty shootout that ensued.

“The truth is that there was confusion for a few seconds as the lines man started running towards the center circle but only some of us on the pitch saw it”.

Appiah said he was aware that people had misinterpreted the now iconic photograph that was published immediately after the match as a sign of confrontation with Gyan, but that was not the case at all.

“Gyan was the best person to have taken the penalty especially after previous penalty successes against Serbia and Australia.”

Appiah who was the first guest on the maiden edition of the World Cup Classics on Max TV made a number of startling and intriguing revelations for the first time as Ghanaians remembered 10 years since the Black Stars famously lost to Uruguay at the Nelson Mandela Bay Stadium.

Regarded as one of the most cherished footballers of his generation, Appiah captained his country to the historic Germany 2006 edition and was general captain in South Africa before joining the backroom staff of the Black Stars at the 2014 edition in Brazil.

He spoke about his early days of playing colts football in Mamprobi and Chorkor before his capture by Accra Hearts of Oat.

The “Tornado” said he has no regrets about his tenure as captain over the eight years and during that eight years period, he had no serious issues with any player because he delt with each player as a brother.