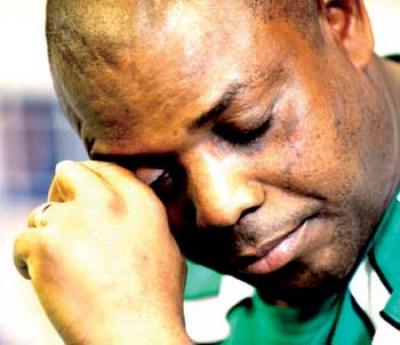 One year to the day of his demise, the late superstar and football legend Stephen Okechukwu Keshi remains as enigmatic in death as he often was in life.

This has compounded the shock and sorrow of his departure for his fans, still wondering why he died of a heart attack.

At the burial last year, his first son, Femi Keshi said that the Nigerian government had not proven that the country was worth dying for by its heroes.

The federal government did not deliver on the promises they made to us as regards our father’s burial,” he said.

“There is no glory in this country. This country is not worth dying for, sir, if our government cannot keep a promise on a state burial.

Former Eagles coach and player, Austin Eguavoen also echoed same statement, “I am not shocked by the way the government has treated this event,” said a disappointed ex-Nigeria captain and teammate of Keshi, Austin Eguavoen.

“For instance, most of us have yet to get the houses the government promised us when we won the Nations Cup in 1994. “You are only energised when you have been looked after.

From San Francisco, to Atlanta, Maryland and New York many will this week-end attend series of memorial program to remember the late Super Eagle star. No memorial event was organized to mark the one year remembrance of the Big Boss by the government and the NFF.

Apart from a tweet from the NFF, nothing significant was done to remember the legend.

Nigeria treats her heroes with disdain, said Nkem Obinna, a footballer. “ The disregard for the labour of our heroes past is the reason why Nigerians lack patriotism for the country.”

According to close associates Keshi was unhappy with the government before he passed on, as he was owed a backlog of salaries.

In Nigeria of today, pensioners who have served the country under various capacities are denied their pension.

Stephen Keshi, won 64 caps playing for the Super Eagles, and died at the age of 54. Keshi, who played as central defender and went on to captain Nigeria national team, was one of only two people to win the Africa Cup of Nations both as a player and a coach.

He had a long career, playing for the Eagles between 1981 and 1995. In 1994 Nigeria reached number five in the Fifa World Rankings ‒ the highest-ever ranking for an African team.

Keshi coached the national side over three spells, leading Nigeria to the 2013 Nations Cup title in South Africa and the last 16 at the 2014 World Cup in Brazil.

Keshi was survived by his four children