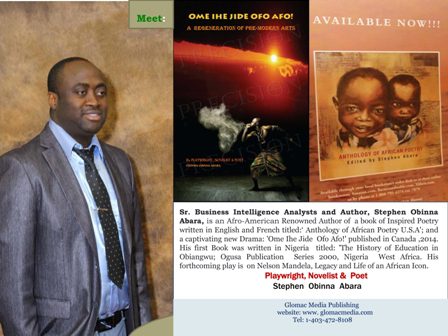 Stephen Obinna Abara, Playwright, Author and Poet, an award winner of the renowned Canadian Millennium Scholarship Fund and founder of the Glendon African Foundation Canada (GAF), has set aside 24 of January, 2015 for the formal launch of his literary works captioned ?Anthology of African Poetry U.S.A? and ?Ome Ihe Jide Ofo Afo!?. Published by Glomac Publishing, Canada, the Anthology of African Poetry U.S.A 2012 edited by Stephen Abara, eight poets of African descent contributed poems about their beloved continent touching on some of the economic, cultural, and social issues facing Africa today.

Through the poems, the cultural, social, and economic concerns facing Africa are dramatized and the readers? understanding of African lifestyle and identify between cultures is improved. Here are many examples of the complexity of forces and circumstances that saturate the African landscape and culture: the plight of children in whom the history of tradition is expected to be fulfilled even at the expense of their well-being, the social crisis of the homeless, despaired, and those trapped by the tragedy of war, and the economic poverty of many.

Ome Ihe Jide Ofo Afo, published by Glomac Publishing, Canada, the Play/Drama signifies an attempt to hold unto truth, traditions and its cultural values. In doing so, the culture(s) involved tend to address the symbolic disadvantage of telling lies compared to truth; and maintenance of such values systems amongst a people or group in Igbo land.

Charmingly, the play re-captures man?s existential and essential approach to ?Truth? and its attributes.

Furthermore, it?s an attempt to re-discover through a practical application of certain forms of this truth in the ideas of associated values such as Justice, harmony, equity and peace. This approach is paramount to the Ibo traditional African religion and culture old and new.

Though the title of the play is written in Igbo, the play itself is written in English. On why he choose the title ?Ome Ihe Jide Ofo Afo!? for the play, this was the Playwright?s response: I choose this title, ?Ome Ihe Jide ofo Afo!? because of its unique and symbolic reference to universal concept of ?truth and justice? in the modern world and other contemporary art forms