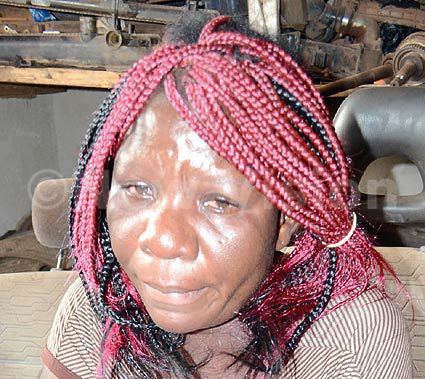 The suspect identified as Sarah Nalweyiso, was arrested last week on during an operation, in Kyebando a Kampala suburb, Kawempe division.

According to police, Nalweyiso has been allegedly buying stolen vehicles in Kampala, dismantling them and selling them as spare parts at her shop in Katale Zone,in Kyebando.

Nawleyiso?s arrest followed the arrest of three others including; Josephine Nakigozi 52 (her mother), Moses Ssemitike (brother) and Agustine Wasswa, 27, a resident of Kyebando who was dismantling the vehicles.

He said Mugyenzi reported the case, and police followed up the matter.

According to Mugyenzi, his car Toyota Corona registration number UAK 730V, was stolen on the evening of January 21, 2015, from the parking yard at Kati Kati Restaurant as he attended his brother?s wedding meeting.

He however, alleges that, two unknown people had been trailing him for sometime before the disappearance of his car.

?When we arrested the three, Nalweyiso went into hiding. We have been hunting for her until today when we have managed to get her,? Muhangi noted.

Nalweyiso was arrested at a saloon in Kyebando, where she had gone to plait her hair.

Muhangi said they first arrested Nalweyiso?s two other friends who revealed where she was and where the cars are dismantled.

However, Nalweyiso denied stealing cars, saying that she only buys them from different people who approach her at the shop.

She said Mugyenzi?s vehicle was sold to her by a man only identified as Kiwa.

Police also searched the shop and recovered several car engines, gear boxes, headlamps of high-class vehicles, windscreens, all worth about sh100m among other items.

The suspects were taken to Kampala Central Police Station pending further investigations. Muhangi said they are continuing with the hunt to get others involved.

The four are to face charges of car robbery.