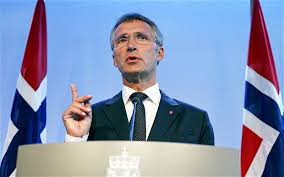 Former Norwegian prime minister Jens Stoltenberg said on Tuesday he was now ready to take the helm of the NATO military alliance – and to break his silence on matters related security policy. “I really look forward to answering questions. I will do that as of tomorrow (Wednesday),” he told Norwegian reporters in Brussels.

Stoltenberg, who in recent months has kept a relatively low profile, made his remarks the day before succeeding Anders Fogh Rasmussen as secretary general of NATO.

On Wednesday, Stoltenberg is set to meet NATO ambassadors and address a news conference.

“There I will say a few words about my priorities,” he said.

Stoltenberg declined to answer questions on Tuesday about his views on the new president of Afghanistan, the militant Islamic State group or NATO’s future priorities.

Stoltenberg told Norwegian news agency NTB that he hoped to cope with the heavy workload – including much travel – by using his “ability to unwind, sleep when possible, and not get stressed.”

The Ghana Beyond Aid Agenda Still In Motion; Not Abandoned – Gov’t