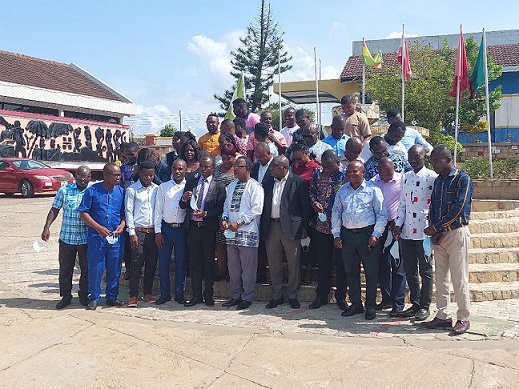 The Head of Local Government Service (LGS), Dr Nana Ato Arthur on Thursday, described as ‘unacceptable’, the over politicisation of every policy and activity which has become the bane of the Country’s development .

The most ‘worrying’ trend, he said, was undermining the enforcement of Environmental bye-laws leading to people contracting communicable diseases including malaria and cholera, while the country spends greater chunk of its meagre resources to treat these preventable diseases.

Dr. Ato Arthur expressed these concerns in a speech read on his behalf at the opening of a two-day training workshop for Environmental Health Prosecutors drawn from Central, Western and Greater-Accra Regions, at Elmina.

The workshop is being organised by the LGS to update the knowledge of skills of the Environmental Health Prosecutors to address the poor environmental health practices in the various communities and the country at large.

The Head of Local Government Service, urged the Prosecutors to be firm, impartial and very professional as they execute their duties devoid of politics.

He said as prosecutors they should be conversant with the Sanitation bye-laws of their Assemblies, particularly what constituted Environmental infraction and be abreast with procedures for prosecuting offenders for them to be on top of their job.

He said although industrialisation has tremendous improvements in people’s lives, it was often at the expense of the environment, citing for instance the spillage of factory residue into water bodies which mostly were the only means of water for domestic use, causing serious ailments later to the people living around such areas.

He has therefore charged Environmental Health Prosecutors (EHP) to act professionally, be guided by the values, ethics and service delivery standards of the Local Government Service to bring environmental law breakers to book.

They should collaborate with the Environmental Protection Agency and other relevant stakeholders to perform their duties well and refrain from demanding favours from offenders who destroy the environment but prosecute them to serve as deterrent.

Mr Kingsley Agyei Boahen, Central Regional Coordinating Director, said that poor environmental practices was a major setback, to the country’s growth, and urged them to help address the ‘nuisance in our communities” as they focus on professionalism which was key in reversing the insanitary practices in the country.

Mr Boahen said, they should ensure that they raked in revenue from recalcitrant residents who carelessly destroyed the environment.