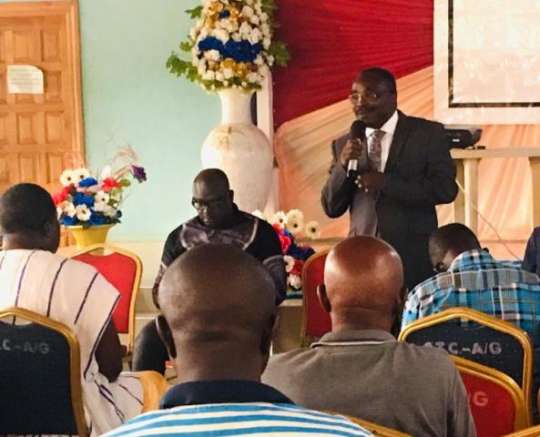 The Chairman of the Greater Accra Regional Lands Commission, Alex Quinoo, has cautioned chiefs and other community leaders to stop selling public and vested lands to developers.

He said it should not be lost on anybody who engaged in such illegality that there would be consequences.
They should also refrain from multiple land sale – a practice, fueling protracted litigation, overlaps and inhibiting land registration processes.

He gave the warning at a public education forum held to educate the people in the Shai-Osudoku District on land administration.

It was also to aid them to have a better understating of the work of the Commission and to solicit their views on how to improve service delivery.

The programme was jointly organized by the Commission and the District Assembly.
Mr. Quainoo told the gathering that the government was making determined efforts to digitize all land records in the country, to remove bureaucratic bottle necks, which often delayed the land registration process.

Digitization of land administration would enhance service delivery and curb insidious corruption in the system.
It is seen as the solution to the institutional inefficiencies, weak technological base, poor map coverage and profound insular work attitudes.

The PVLMD has responsibility for the management of vested and state lands, while the SMD coordinates the preparation of plans from the data derived from survey and any amendment of the plans with LVD charged with assessing stamp duties and valuation of compensations and the LRD dealing with matters relating to registration of lands.

Mr. Nsafoah spoke of the establishment of a Client Service Access Unit (CSAU), to serve as a one-stop shop for all business transactions at the Lands Commission.

He encouraged the prospective developers to always demand for a site plan and to conduct a search from the three divisions of the Commission before buying any land.

They should avoid dealing with middlemen anytime they wanted to transact any business with the Commission.
Mrs. Francisca Okyere, the Regional Director of the Land Use and Spatial Planning Authority, educated the people on the importance of spatial planning processes.

She asked them to refrain from building along waterways to help prevent flooding and the risk of having their property demolished.

Pictorial presentation of proposed Planning Scheme (layout) of the area was shown to the participants to help prevent future encroachment.

Some areas in the district had been demarcated for various purposes such as hospitals, schools and farming.

The Commission asked chiefs and family heads who had sold lands within the demarcated areas to submit their site plans within a month, in order to incorporate them into the proposed Planning Scheme, failure of which they risked losing those lands entirely.