The unveiling ceremony took place in a charged atmosphere at the Achimota Retail Centre with thousands of fans and music enthusiasts pushing to catch a glimpse of the brand ambassador as well as get selfie opportunities with him. Fans also enjoyed samples of Storm Energy Drinks made available for sampling at the event. Others took away Storm energy drink samples as they won quizzes held at the unveiling event

Kasapreko Company Limited selected Shatta Wale as the brand ambassador for the Storm energy drink brand because the superstar embodies key attributes of Storm Energy Drink such as innovation and creativity, authenticity, passion, energetic, originality and determination. He remained relevant since he re-appreared on the Ghanaian music scene and this also captures what Storm Energy Drink seeks to bring out in Ghanaians. The music icon is known to support local products and industries.

Shatta Wale, formerly known as Bandana, burst out into the Ghanaian music scene in the early 2000s and since then he has maintained a top spot and popularity among music lovers home and abroad with great music and performances.
Kasapreko has from its establishment grown to become one of the most successful beverage manufacturers in Ghana and internationally . Storm Energy drink is manufactured and produced locally in Ghana and meets all regulatory standards with approval by the Food and Drugs Authority.

Mr. Richard Adjei, Managing Director of Kasapreko Company Limited is very excited about having the music icon on board as a brand ambassador and said together, patrons of Storm energy drink will enjoy positive power and energy as well as fun and pleasure.

“Shatta is authentic, original and has stayed true to his roots – from his first song, it was obvious he is creative and innovative and has passion for the music industry, He has developed a niche in the music industry for himself and has worked hard to attain the success he has achieved so far” which is admirable, Mr Adjei said.

He said as Kasapreko Company Limited unveils its brand ambassador for Storm Energy drink, the company remains committed to providing patrons with more quality products, great fun and excitement to energize their days and liven up parties.
Kasapreko Company Limited produces non-alcoholic beverages which include the charity- driven Awake Purified Drinking Water, Hi5 Chocolate Malt and a range of Royal drinks in the Apple, Cola, Ginger, Orange and Lemon-Lime flavours to fulfil the needs of customers who wanted quality non-alcoholic beverages from the multinational company. It also produces alcoholic beverages such as Cardinal, Alomo Bitters and Kasapreko London Dry Gin to meet the needs of patrons in that category. 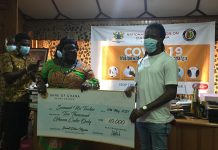