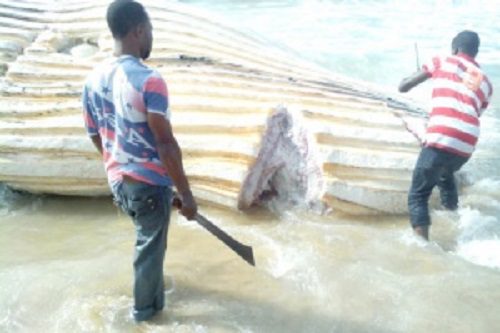 The black fish without scales, measuring about 17 meters long, three metres high, has two wings, a tail and a head, is yet to be identified.

The Chief Fisherman of Half-Assini Landing Beach, Opanyin Emmanuel Odwire, in a chat with the Ghana News Agency (GNA) at scene on Monday, said they woke up on Sunday to find the fish ashore, which was still alive at the time.

According to him it died some hours later.

Mr Odwire said the fish which is not consumable will be pulled to the outskirt of the town for burial to prevent it from decomposing on the beach to cause environmental hazard for the community.

The Western Regional Chief Programme Officer of the Environmental Protection Agency (EPA) Mr Shini Fiagome, who led a team of Environmental Officers from both the Regional and the District office to the scene, told the media that the EPA was yet to identify the fish and establish the cause of its death.

Mr Solomon Odwire, an elderly fisherman from Ekumfi Emuna in the Central Region, said throughout his 60 years experience in fishing, he has not seen a fish like that before.

Among the large number of the people which trooped to the place are students of Half-Assini Senior High School (SHS) and pupils of basic schools in the town.