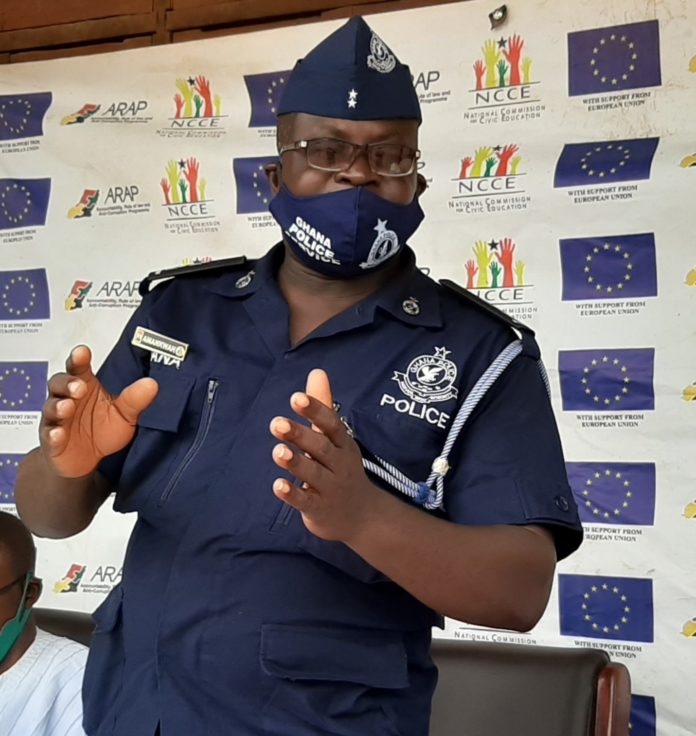 Assistant Superintendent of Police (ASP) Francis Kwasi Amankwah, the Builsa North District Police Commander in the Upper East Region, has admonished residents at Bilinsa, a community in the District, to protect their properties from thieves.

“You should ensure that the properties that you acquired over the years will not be taken away by a criminal. The criminal’s motive is to steal your property to create wealth for himself. We in possession of the properties have to ensure that we strengthen the security around the target property.”

ASP Amankwah gave the advice at a social auditing programme organised by the District Directorate of the National Commission for Civic Education (NCCE) after the community members raised concerns about rampant stealing in the area.

He said security was a shared responsibility and emphasized the need for property owners to ensure their properties were well protected.

“Make sure that your valuables are well protected, don’t just put it in a room without a door and say Police are in town.”

He said despite the Police, residents needed to play their role by protecting their properties, adding that motorbikes and cattle were the most stolen properties across the District.

“Anything that a criminal will see and want to steal should be secured. You have to remove all targets out of sight, for they say out of sight is out of mind.”

The Commander said all implements such as hammers, pick axes, hoes among others which could be used by criminals to perpetrate crime, should not be left at vantage points.

“Criminals do not come with those tools in their hands, but they use the tools you leave at your doorstep to operate.”

“So we have to ensure that we will not leave anything that the criminal will lay hands on to operate,” he said, and further stressed that animals sent out for grazing in bushes should not also be left unattended to as criminals could easily steal them.

Addressing the need for community watchdog committee in the area, ASP Amankwah said selected people needed to be vetted to ensure they had no criminal records.

He said members of the community watchdog committees should not be selected based only on physical appearance.

“You might choose a criminal who will be in their midst, know when they go to the field and take advantage of their absence to operate. So they must all be vetted,” the Commander noted.