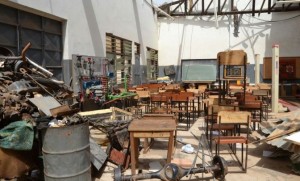 Barring any timely intervention, some students of Bolgatanga Technical Institute (BOTECH) would likely to miss their practical examinations on Monday.

As a result of last Thursday’s stormy rain in the Upper East regional capital, a number of houses as well as the school had their roofs ripped off. Several properties worth millions of cedis were destroyed by the rainstorm.

The Auto Mechanic Department of BOTECH is one of the blocks that were hardly hit by the storm, exposing all their machines to the harsh weather condition.

The students are now praying for divine intervention for a sunny atmosphere between now and Monday lest it rains, all their equipment for Monday’s examination would be soaked. TV3’s Rabiu Alhassan visited the school on Saturday and found some Auto Mechanic students busily working on a machine under a tree outside the main auto block, whose roofs have been ripped off.

The head of department Nsoh Gilbert appealed to government and the Assembly to quickly intervene to avoid inconveniences.

The Municipal Chief Executive for Bolgatanga, Philip Adongo Aboore assured affected persons and institutions of quick response through NADMO and the Assembly.

He cautioned residents to prepare for the rains especially those living in flood prone areas.

The Akantome Primary School in the municipality was also affected by the rainstorm.

Put your phones aside, focus on the exams: DCE charges students