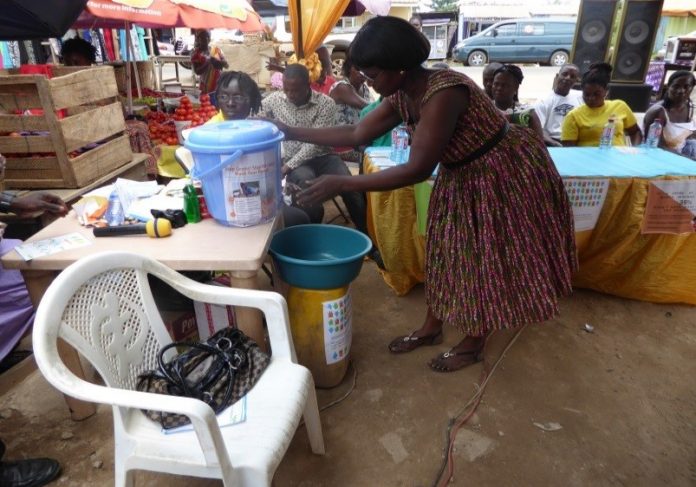 The simple act of washing one’s hands with soap can dramatically reduce the incidence of diarrheal disease and pneumonia which together account for the majority deaths of children around the world.

A study conducted by UN and UNICEF revealed that 272 million kids miss school due to diarrhoea each year; 1.7 million children die from Diarrhoea and Pneumonia, and that stunting affects 161 million children around the world. The realization of Global handwashing is to encourage everyone to wash their hands with soap after using the toilet and before handing food. This year’s theme was “Making Handwashing a Habit”

In creating awareness on the benefits of making handwashing a habit, the Water & Sanitation for the Urban Poor (WSUP) in collaboration with Ga West Municipal Assembly organised a demonstration exercise to commemorate the Global handwashing day to educate market women, buyers, passer-by on “Making Handwashing a Habit” at the Amasaman Market. The demonstration involved representative from Amasaman Zonal Council, leaders of the market, traditional authorities. The demonstration exercise attracted over 200 audience being market women, labourers working around the market, shop owners around the market and people who had come to market to buy.

Mr. Emmanuel Effah, Head of the Amasaman Zonal Councill of the Ga West Municipal Assembly delivered a speech on the relevance of regular hand washing. He educated the audience on how and when handwashing should be done. Mr. Effah hammered during his speech on the need for market women to use water and soap to wash their hands before handling food in the market and to ensure they have water and soap with them at all times.

Madam Sarah Otoo, Assistant Head of the Zonal Council, led the demonstration exercise on handwashing by enlisting the 4 steps for handwashing before handling food and after using the toilet. These were: Wet – the hands with clean, running water, turn off the tap and apply soap; Lather – the hands by rubbing them together with soap making sure to lather the back of the hands, between the fingers, under the nails and scrub the hands for at least 20 seconds; Rinse – the hands well under clean running water; and Dry – the hands using clean towel/handkerchief or air dry them. Some audience were called to exhibit the steps one need to take when washing the hands and all successful exhibiters were rewarded.

Mr. Anthony Addae, Monitoring and Evaluation Officer of WSUP told the media that awareness creation for handwashing with water and soap is done every year globally to make handwashing with water and soap a habitual ritual. Mr. Addae took the opportunity to talk about WSUP’s Toilet in Every Compound program which is being promoted by Toilet sales Agents who have been trained to sell toilets products and services in the various communities in Ga West. Mr. Addae added that the program has a financing scheme through HFC Boafo to help household acquire their own toilets and that those interested should contact the Ga West Municipal Assembly.

Madam Elinda Akosua Agyei, Administrative Officer of WSUP explained to the media that the aim of the sketch was to paint a lasting picture of all the handwashing messages in the minds of the audience present.