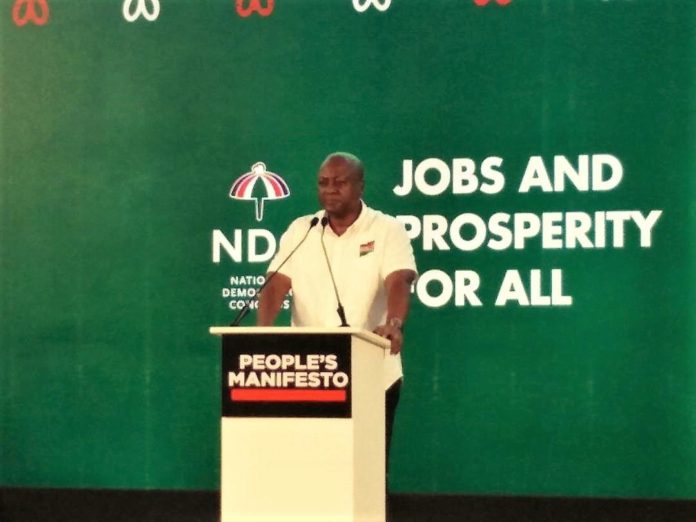 Ghana’s largest opposition party, the National Democratic Congress (NDC), has promised to step up infrastructural development at Suame Magazine, a renowned metal fabrication enclave, when given the mandate in the December general election.

“One of the party’s key agenda is to introduce modern diagnostic equipment to modify the methods of repairing and fixing vehicles,” former President and flag-bearer of the NDC, Mr. John Dramani Mahama, told a ‘Town Hall Meeting’ in Kumasi.

The party intends to train artisans at the enclave to adopt contemporary methods of metal engineering and vehicle repairs to add value to their work.

Suame Magazine, the largest metal fabrication enclave in the West African sub-Region, is captured under the NDC’s ‘People’s Manifesto’ for the December 7 polls and plans to develop it include transforming the area into an industrial park.

The party says it would be working closely with the Suame Magazine Industrial Development Organization (SMIDO) to give the area a befitting status.

Former President Mahama said in pursuance of the NDC’s vision, his administration would invest generally in the infrastructural development of the enclave.

Situated in the Suame Municipality of the Ashanti Region, the enclave provides more than 200, 000 direct and indirect jobs to the people, according to the SMIDO.

In spite of its strategic importance to the local economy, the metal engineering and vehicle repairs industry is beset with some pertinent challenges – such as the excessive exposure of artisans to harmful chemicals in the course of their work and conservative manual working practices.

Some research scientists and health experts, in an interview with the Ghana News Agency, have suggested the creation of a safer working environment to protect the artisans.

The persistent exposure of the artisans to all forms of poisonous chemicals, especially those from the used engine oil, which could find their way into one’s internal organs, had to be addressed.

According to some experts of the College of Engineering of the Kwame Nkrumah University of Science and Technology, such harmful exposure had its own devastating health implications, especially on one’s kidney and liver.

Former President Mahama said the provision of good roads, health, and skills-acquisition training facilities, as well as insurance schemes for the artisans, were also part of the NDC’s plans for the enclave.

The ‘Town Hall Meeting’ was designed by the opposition party to interact and also explain to the public, some of the thematic areas of its recently-launched ‘People’s Manifesto’.

It talks about the vision of the party in the area of job and wealth creation, technology and industrial development, youth, infrastructural and women’s development, amongst others.