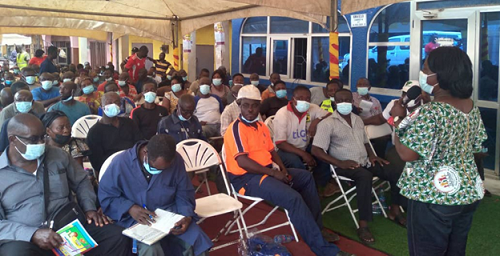 The Suame Municipal Directorate of the National Commission for Civic Education (NCCE) has stepped up public education on violent extremism, national cohesion and peaceful co-existence.

The move is to sensitise the public to be security conscious and lookout for suspicious characters that could be a threat to national security as responsible citizens.

It also formed part of a broad campaign being executed by the NCCE across the country in collaboration with the National Security Ministry with funding from the European Union (EU).

The Suame NCCE has, therefore, been engaging various identifiable groups on the need to contribute to the stability of the country by prioritising their personal security as well of their communities.

It has also been visiting churches, mosques, markets and other public places to spread the message.

Mrs Constance Amankwa, the Municipal Director of the NCCE, who has been leading the campaign, said security was a shared responsibility that must not be left only to the security agencies alone.

She encouraged the public to report any suspicious character in their communities to the appropriate authorities as a civic responsibility to avert a possible attack on innocent citizens.

Mrs Amankwa also spoke about peaceful coexistence at the community level to promote national cohesion and advised the youth to desist from all activities that could spark violence in the Municipality and rather contribute to the development of their localities.

She entreated community leaders such as chiefs, assembly members, unit committee members and opinion leaders to be proactive in addressing issues that could lead to violence and destruction of property.