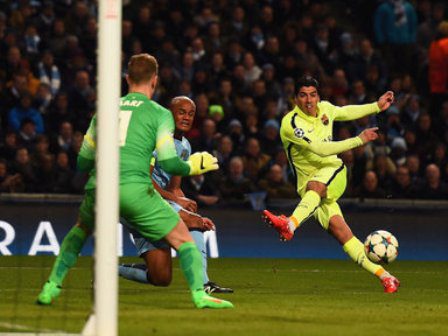 Former Liverpool goal monger Luis Suarez returned to England on Tuesday to show glimpses of his former days in the premiership as his brace gave Barcelona a 2-1 win over Manchester City at the Etihad Stadium in the first leg of the 1/16 stage of the UEFA Champions League. With Yaya Toure’s absence due to suspension City were completely short of gas in the midfield as Fernando, who stood in the shoes of the Ivorian midfielder failed to come to the party allowing Barcelona to thread crisp of passes together.
Suarez gave the visitors the lead in the 16th minute when Vincent Company in an attempt to head a ball away from the box gifted Suarez a birthday cake as the ball felled right in front of the Uruguayan who whipped a left footed shot to the far corner.
The visitors looked in ominously good form as they enjoyed an elephant share of the possession as Manuel Pellegrini’s side were ruthlessly torn apart by the Spanish football juggernauts in the first half.
Luis Suarez made it 2-0 for Barca in the 31st minute. Rakitic took the ball deep from the midfield, finds Messi, who skips away from three City defenders and lays off for leftback Alba, whose cross was whisked into the net by the former premiership goal king.
Sergio Aguero pulled one back for City in the 69th minute. Fernandinho played Silva through and the Spanish midfielder laid off for the Argentine who hammered the ball into the roof of the net.
The hope of Manchester City coming back into the game got dashed in the 74th minute when Gael Clichy was sent off for bringing down Dani Alves after missing the ball in the air.
However, Barcelona got the chance to increase the tally in time added on from the spot, but Lionel Messi’s penalty kick was saved by Joe Hart.
Italian side Juventus also defeated Borussia Dortmund by 2-1 in Turin.