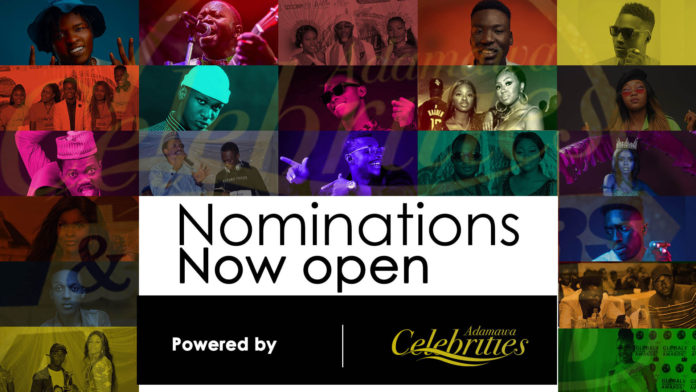 The countdown to the 5th Adamawa Celebrities and Achiever Awards has begun.

Submissions are from 1st June 2020. The deadline for submissions is the 30th of August 2020. Nominations will be announced on the 15th of September, 2020.

The 5th Edition of the ACAAs is proposed to hold on the 20th of December 2020 in Jimeta-Yola, Adamawa State, and will be televised nationwide, and globally via online TVs, Also to be featured on prestigious online newspapers and blogs.

Only original contents produced and released between December 22nd of 2019 and July, 2020 may be entered for this celebration of creativity, innovation and service to humanity.

The Adamawa Celebrities and Achiever Awards was founded in 2015. Mostly held annually in Adamawa State, the ACAAs is, without doubt, the most prestigious and glamorous edgy entertainment and lifestyle award event in Northeast Nigeria.

Evolving from a one-day event — televised live, to an annually chronicled Northern event, the ACA Awards is now an established engagement platform for all creative industry contributors, Beauticians, Fashion Designers, and community builders.

The primary aim of the ACA Awards is to facilitate the development and showcase the social relevance of Adamawa State to the global community.

The awards are presented to recognize and honour the excellence of professionals of Adamawa descent in the creative industry, fashion and lifestyle globally. ACAAs also serves as a platform that continually unites the local content creators through arts and culture.

The 2019 edition of the Adamawa Celebrities and Achievers Awards took place on the 21st of December at the Lelewal Hotel and Suites in Adamawa, Nigeria.

The exciting and glamorous event was hosted by the Hottest Comedian, Tujens and TV Personality and Fashionista, Rejoyze K’nan.

Those honoured at the event, although conspicuously absent include Senator Ishaku Abbo for “Beacon of Hope Award”, Senator Binos Dauda Yaroe for the “Award of Excellence in Recovery & Peace Building”, Senator Abdulaziz Nyako for the “Most Outstanding Senator (2018/19)”, Hon. Abdulrazak S. Namdas for the “Most Outstanding Rep Member 2019”, Hon. Zachariah D. Nyampa for the “Politician of the Year” and other honorary awards including; Dr Bitrus F. Chagwa for “Dynamic Personality of the Year”, Leader Leneke for the “Award of Excellence in Productivity”, Dr John Ngamsa for the “Entertainment Philanthropist of the Decade”, Mrs Aisha Yusuf Ishaku for “Female Entrepreneur of the Year”, Randy Radeno Haniel for “Inspiration of the Year”.

Various awards were given to the different artists for their works within the year in review, including some media channels.

Poland angry at report celebrities got first shot at vaccines

Accra Fashion Week Is Set For December 2020, See All Details Inside