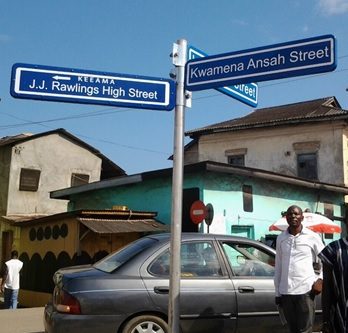 The Kpone-Katamanso District Assembly (KKDA) has appealed to stakeholders to urgently submit to the Assembly proposed names for streets in the district. This would enable the Assembly to complete the naming of all streets in the district as directed by President John Dramani Mahama.
Mr Mohammed Yakubu, Kpone-Katamanso District Coordinating Director, made the appeal on Thursday during a maiden town hall meeting with stakeholders at Oyibi.
Mr Yakubu said the Assembly had completed about 15 per cent work on the street naming exercise.
He said his outfit was now waiting for the suggested names from the stakeholders especially the traditional leaders for the project to be completed.
He said all the streets in the district had been successfully identified and put on software awaiting the actual naming.
Mr Yakubu said even though the project was behind schedule, the expected target had been achieved.
He said the delay was due to the scattered nature of the towns in the district which stretches from the coast to the mountains.
On the issue of delays in issuance of a building permit, Mr Yakubu stated that when all genuine documents needed for the permit was submitted it should take less than two months for it to be processed.
He said delays were mostly due to multiple claims to a piece of land which the Assembly must look into before issuing a permit in order to prevent conflict in the district.
Answering questions on bad roads in the district, he stated that the District currently did not have an Urban Road Department and therefore uses the services of the Department in Tema.
According to him, since the District could not wait for government to get funds to construct the roads, it had hired the services of a grader to make all roads in the district motorable.
He said his outfit was gathering funds to purchase its own grader to help solve the problem.
Alhaji Antiaye Tetteh, Kpone-Katamanso District Chief Executive, said it was crucial to develop transparent and acceptable principles to guide the delivery of services to raise the confidence levels of the citizenry in the Assemblies.
Alhaji Tetteh said a key indicator of accountability was holding stakeholder gatherings such as town hall meetings to inform the citizenry of the performance of the Assembly as well as receive feedback from them to determine the way forward.
“The Kpone-Katamanso District shall, at this and subsequent gatherings, give account of all projects and programmes executed or being executed by the Assembly since its establishment.
Mr Mark Ofori, KKDA Development Planning Officer, told stakeholders that a development plan had been drawn for the district to cover 2014 to 2017.
Mr Ofori explained that no project would be done outside the ones captured in the plan unless it was an emergency project.
He said out of the numerous challenges facing his department after consultation with stakeholders, the Assembly had prioritized the construction of a police station at Oyibi to enhance security in the area.
Other projects to be constructed by 2017 include the construction of a lorry park, market stalls, rehabilitation of roads and provision of health facilities.
During an open forum, residents complained about irregular water supply in the area, high payment of penalty on building permits.
Other issues discussed included want of a senior high, technical, or vocational school in the district and the need for a scholarship scheme to encourage the youth to climb the academic ladder.