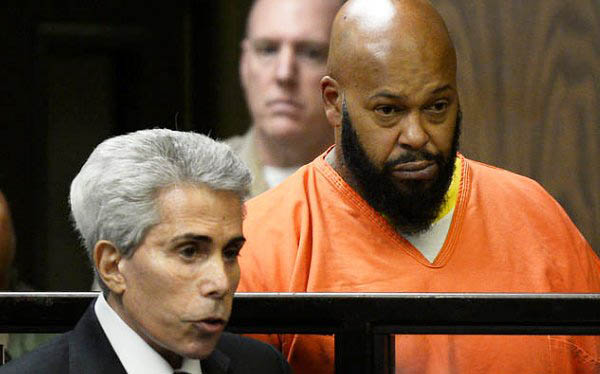 MSuge Knight will remain behind bars for six weeks as his bail review hearing related to a fatal hit-and-run case has been pushed back to March 20. Suge looked healthy when appearing in a Compton courthouse on Monday, February 9 along with his lawyers. A prosecutor and Suge?s lawyers asked for a delay to prepare for the bail review hearing. Deputy District Attorney Cynthia Barnes said there was still work to be done before the hearing, adding that she had ?a very large stack of uncharged crimes? connected to Suge. Suge?s lawyer David Kenner said he planned to verify the veracity of any new evidence submitted.

In a separate move, David asked Los Angeles County Superior Court Judge Ricardo Ocampo to allow Suge to see his doctor while he was in custody. However, Ricardo denied the request, saying, ?I?m not going to grant that. The county has more-than-competent doctors.?

?In terms of the case, optimistic. In terms of his health, not so much,? David told reporters during a news conference on Monday when asked about how Suge?s feeling. According to David, Suge?s health problems are serious. ?Blood clots are always potentially life-threatening,? he said, ?I understand that he passed out and was having some serious bleeding issues.?

Suge was sent to hospital in ambulance on February 3 after having a panic attack following his arraignment. He was allegedly handcuffed to the hospital bed and was under a 24/7 watch for potentially deadly blood clot. The music mogul was released from the hospital on February 5 and was immediately taken back into custody at Men?s Central Jail.

IOC President looks ahead to “new era” of Olympic Games

GNAT urges teachers not to return to the classroom