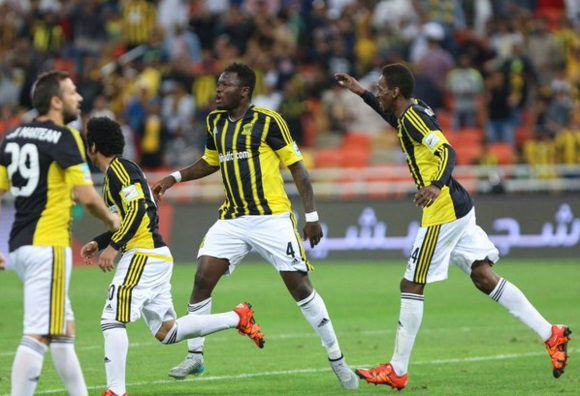 Suspended Ghana midfielder Sulley Muntari scored his second goal in two goals in the Saudi top-flight for Ittihad Jeddah on Thursday when they defeated Al-Raed 6-2.

The former Inter and Milan star, 31, had been the creator of a classy finish claimed by Colombian Gelmin Rivas as the Jeddah giants went goal crazy against the struggling side at the Prince Abdullah al-Faisal Stadium.

Attention seems to have gone off the former Sunderland midfielder but he is quietly making his own small noise in the Saudi league and steering his club to put in a challenge for the league title.

Ittihad perpetuated their recent good run in the league and Muntari’s performance was the fulcrum of their victory.

His goal was a trademark finish in the mode of the solitary strike against Najran last Friday before the 21,000 fans on attendance at the game.

It was toast of unleashing a piledrive from 25 yards that rifled the net and sent the jubilant watching crowd into ecstatic mood over their biggest scoring win of the league season.

Though it was not their biggest in terms of marginal victories, it was Muntari’s performance on the night that left many talking and hailing the Ghana star.

The triumph has inspired their quest to pile pressure on leaders Al Hilal as they cut the points gulf to four – though the leaders have a game in hand.

Muntari has featured in 14 games and has tied two goals to his appearances for the club.