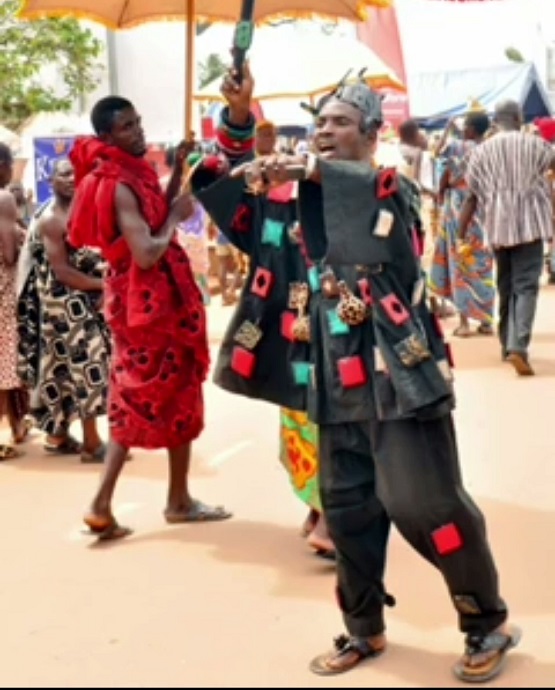 Nana Nyorywa Blay I, Sunmankwa Hene (Chief Priest) of Lower Axim Traditional Area in the Nzema East Municipality (NEMA) in the Western Region has criticised some chiefs in the Traditional Area for betraying their own in order to gain political leverage than than protecting their own and the image of the Area.

“Curse be upon anyone who knows the truth but does not want to say it. Myself, I saw one of the chiefs whose name I don’t want to mention, receiving a bountiful parcel from the former Minister and MP in his palace. So what are they talking about?” He queried.

He made the remark in an interview with Newsghana when commenting on the recent lies peddled against the former Minister of Tourism, Arts and Culture and Member of Parliament (MP), Madam Catherine Abelema Afeku on the Auditor General’s (AG) Report on the 2018 Kundum festival by some chiefs.

The Sunmankwa Hene said it was clear evidence that the festival was highly patronised and graced by both national and international celebrities which puts the town on the globe.

According to him, the former Minister never mentioned any individual chief as a beneficiary of the money and so for the chiefs to come out to say that they never received any money was misrepresentation of the facts and palpable lies peddled to tarnish the image of the hard working Minister.

“We saw the hard work of the woman before, during and after the Kundum festival celebrations and the various support she offered to the festival. The woman has explained that the money was used to foot the bills incurred by the Planning Committee on behalf of the celebration”, he indicated.

In a related development, members of the Concerned Youth of Axim expressed worry on the press release from the Office of the President of the Lower Axim Traditional Council, Awulae Attibrikusu III which claimed that Madam Afeku sought to use him (Awulae Attibrikusu III) as a witness on how the 200K cited in the Audit Report was expended during an interview with Citi Fm’s Eye Witness news on Friday 20th August, 2021.

They also rejected the assertion that Madam Afeku was not factual in her interview with Citi fm and said it was rather Awulae Attibrukusu III who has been misled to believe so since they were now clear that Awulae had not listened to the audio but fallen for the skewed propaganda from his Planning Committee Chairman with such assertions.

“We wish to state emphatically that, we have painstakingly listened to the entire 30 minutes interview on Citi Fm and no where did Hon Catherine mention that Awulae Attibrukusu III and for that matter any other Awulae was a witness to disbursements of the said amount”, they stated.

In a press statement issued and signed by Mr James Kainyah, Secretary to the group, what the former Minister said was that, “the 200K was spent on musicians who were invited to perform at the 2018 Kundum festival and the President of Lower Axim Traditional Council bears witness to the fact that these artistes were present and performed during the 2018 Kundum festival celebration as he (Awulae Attibrukusu III) was seated right beside her at the time.”

“Our Paramount Chief has been misled and totally erred on that score”, he emphasized.

“We are sorry to say that the press release fails to bring finality to the issue but rather raises more questions as some sub-chiefs of the Traditional Council position is totally different from what Awulae has appended his signature to. The question we ask ourselves, is this Awuale’s press release politics as usual?” He asked.

Mr Kainyah said no one has accused Awulae Attibrukusu III and the Lower Axim Traditional Council of any involvement in how the 200k was spent and deemed the statement as a figment of the Planning Committee Chairman’s own imagination and creation to cause disaffection.

According to him, it was his hope that the Paramount Chief would have called for cool heads and invited parties to discuss the issue to bring finality to it but rather stoked more fire to the it, and added that the 2018 Axim Kundum was one of the best after a very long time and if the efforts of the former Minister will not be appreciated, should not be vilified since it will not be accepted.