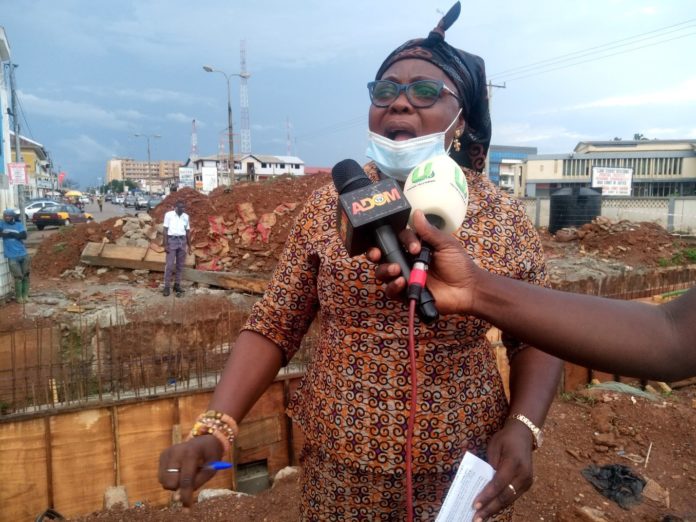 Madam Justina Owusu-Banahene, the Sunyani Municipal Chief Executive has directed Kappa Kay Construction Limited working on a concrete drainage system to speed up and complete the work by October ending this year.

She observed that delays on the project had caused unusual heavy vehicular traffic jams and created mess in the Central Business District (CBD) of Sunyani.

The unpleasant situation has attracted displeasure of motorists, drivers and residents causing public uproar in the ‘city’, Mad. Owusu-Banahene noted and warned the contractor the Municipal Assembly would no longer tolerate any further delay on the project’s completion.

Madam Owusu-Banahene gave the directive when she inspected progress of work on the project, awarded by the Ministry of Works and Housing in March, and scheduled for completion in November 2019.

Costing about GHC190,000.00 the purpose of the project is to solve the flooding problem within the CBD of the Bono Regional capital.

In May this year, the ‘city’ authorities barricaded a portion of the principal street of the capital, around the High Court for the work to commence on the project.

That notwithstanding, she said “the Assembly is still unhappy about the slow pace of work”, and therefore impressed on the contractor to work expeditiously to complete the project to bring sanity in the ‘city’.

Culvert decking and some major works were on-going during the visit, however, Mr. Kingsley Friar, the Managing Director of Kappa Kay Company Limited gave the assurance the project would be completed on schedule.
He admitted the delays in the execution of the project, and pleaded with residents to cooperate with him to deliver excellent work.

Mr. Friar explained the Ghana Water Company Limited’s (GWCL) main distribution lines were buried on the site, and it took some time for the GWCL to relocate those pipelines to avert any mishap.