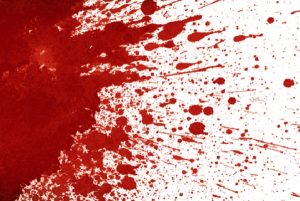 The celebration of the New Patriotic Party’s (NPP’s) December 7 electoral victory in Sunyani on Saturday night, was marred after two youngsters decided settle personal scores instead.

The two who were among teeming youth jubilating on the principal streets of the Sunyani Municipality, were soon seen engaging in fisticuffs over a remote cause.

One of them only identified as Yaw in his mid 20s in the process had his ear nearly chopped off by the other which saw onlookers fleeing from the bloody scene.

According to eyewitnesses account, the two were reported to have taken in alcohol by virtue of the fact they were reeking of it and resuscitated an old beef which resulted in the fight when they met.

It took the timely intervention of police to save the situation.

The injured person was immediately rushed to the Sunyani government hospital for treatment while his attacker has been taken into police custody and is assisting police in their investigations.

Police confirmed the incident to ultimatefmonline.com, but promised to step up measures in averting such occurrence in the coming days.

The leadership of the NPP has also called on  supporters to jubilate in moderation and warned that anyone who falls foul of the law will be dealt with accordingly.