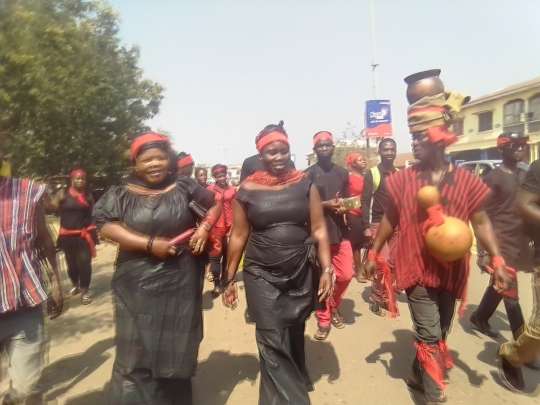 The Sunyani Traditional Council has declared war on perpetrators of alleged cases of ritual killings and armed-robberies that have been causing fear and panic among residents in recent years.

In the last couple of years, the citizenry in the ‘city’ of Sunyani and its environs have not known peace because of
reported cases of murders, kidnappings and robberies.

Consequently the Council with the support of the Sunyani Youth Development Association (SYDA), Sunyani Zongo Youth for Development and other youth associations on Monday performed rituals and traditional rites to invoke the powers and assistance of the gods and ancestors to expose the culprits for apprehension and dealt with by the law.

Clad in red and black costumes, the youth groups marched through the principal streets of Sunyani, amidst chanting of

war songs and issuing of curses against those perpetrators that “such unacceptable doings must end now or face the wrath of our ancestors”.

Eventually, they joined the members of the Council at ‘Sunyanitifi’ – the supposed abode of the main ancestral god

of Sunyani located somewhere near the Sunyani Estate and presented a live ram, Schnapps, a gallon of palmwine and otheritems to Nana Appiah-Kubi, the chief linguist of Sunyani

Traditional Area who together with Opanin Yaw Kramo, the Sunyani ‘Nsomankwaahene’ performed the rites.

In an interview with the Ghana News Agency (GNA), Mr Kwadwo Akomeah Sakyi, the Secretary of the association claimed “some individuals have been operating in Sunyani as a cartel and kidnapping and killing their victims for ritual purposes for wealth”.

He bemoaned that unknown group of boys engaged in ‘Sakawa’, meaning in local parlance as (a quicker way of getting wealth through ritual means of using human parts and blood) are also operating in Sunyani.

The situation-alleged murder cases, ritual killings and armed-robberies were posing threats to the security of
residents in Sunyani and its environs and therefore disturbing the peace and hindering progress of the ‘city’, Mr. Sakyi lamented.

In another interview, Nana Akua Pomaa, the Sunyani Kontire Benkumhemaa who is an Ambassador of the Association added “we did that to inform the serial killers, ritual murders and the suspected businessmen behind such atrocious and inhuman acts that Sunyani is not no man’s land.

“We will not entertain insecurity situations in Sunyani, so it must end now”, she vowed, adding that “Sunyani is known to be peaceful ‘city’ and we want to ensure peace and absolute security forever”.