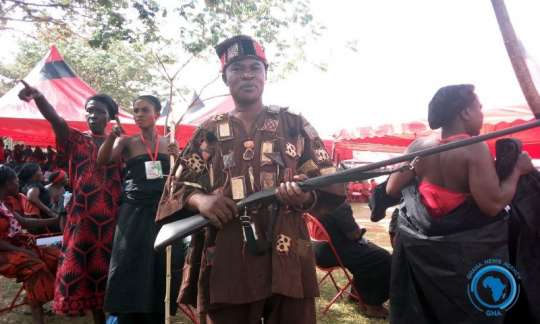 Describing the situation as ‘unacceptable’, Nana Apraku assured that the Traditional Council would fish out the “miscreants” and restore peace in the Sunyani Municipality.

The Bono Regional Police Command has ordered for immediate investigations into the lawless activities that have characterised the event, underway in Sunyani.

Traditional warriors have been sighted in several videos, which have gone viral on the social media, attacking and subjecting innocent residents in the Sunyani town to severe beatings.

The assaults, which have created public fear in the Municipality, have however received outright condemnation from the public.

But, in an interview with the Ghana News Agency (GNA) in Sunyani on Thursday, Nana Apraku called on the public to exercise patience as the Traditional Council collaborated with the Police to bring the situation under control.

“We will not sit down unconcerned and fold our hands for some few miscreants to dent our image and rich culture. We are assuring you that any trouble maker would be fished out and accordingly dealt with,” Nana Apraku stated.

Nana Kwadwo Manu, the Chief of the traditional executioners (Abrafuohene) also told the GNA two suspects had been apprehended and placed in Police custody, while the Police continued with their investigations.

“Upon their arrest we realised the suspects are not members of the traditional executioners, and the Police is investigating the matter,” he said.