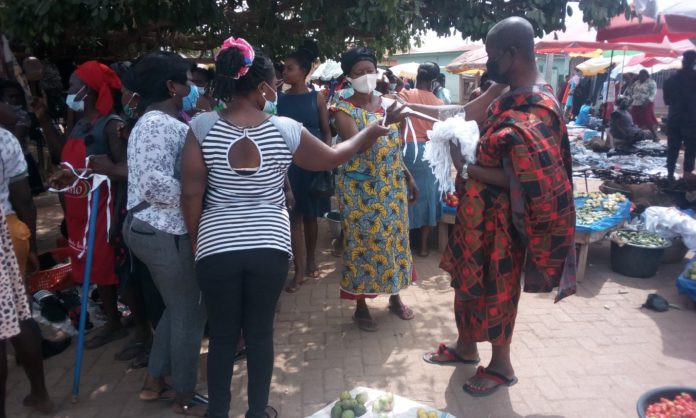 Section of residents in the Sunyani West Municipality have expressed readiness to partake in the COVID-19 vaccines to boost their immune system.

Some of the residents in Fapre interviewed by the Ghana News Agency (GNA) on Tuesday during a distribution of face/nose mask exercise, stated that they were waiting patiently for the start of COVID-19 immunization exercise in the Municipality and in the Bono Region in general.

Ms Rita Korkor, a trader at Fiapre, said she was so much afraid of the diseases and so she would be the first person to take the vaccine in her area.

The exercise was carried out by the Sunyani West Municipal Assembly together with the Municipal Security Council to help enforce the wearing of face mask in the area.

About 3,500 reusable nose\face mask and alcohol-based hand sanitizers were distributed to traders, households and individual residents at Fiapre, Dumasua and Mantukwa communities in the Sunyani West Municipality.

Mr. Martin Obeng, the Sunyani West Municipal Chief Executive (MCE), said it was likely there would be a third wave of the pandemic, which according to him would be more dangerous than the recent epidemic and therefore there was the need to ensure that resident in the Municipality were protected from contacting the disease.

He pleaded with the public to strictly comply with the COVID-19 safety measures to help save their lives and that of others and warned that the ban on gatherings such as funerals, weddings, out dooring, parties and all night church services were still in forced.