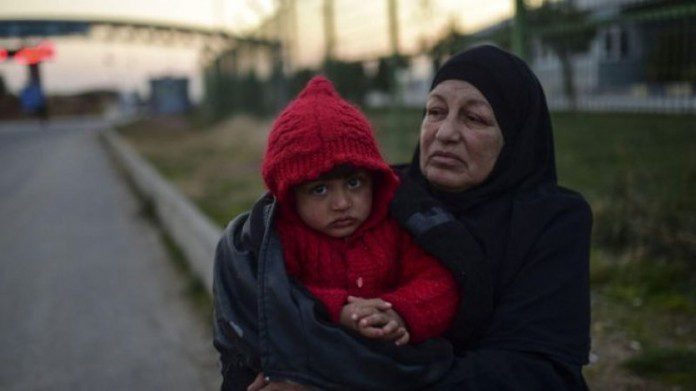 The humanitarian situation is deteriorating rapidly, the ICRC added, with water supplies to Aleppo city cut. The Syrian government is attempting to recapture rebel-held parts of the major city backed by Russian air power.

Turkey is under pressure to allow in 30,000 Syrian refugees stranded on its border.

In a statement, the ICRC said supply routes for aid had been cut, putting civilians under “enormous pressure”.

“The temperatures are extremely low and, without an adequate supply of food, water and shelter, displaced people are trying to survive in very precarious conditions,” said the head of the ICRC in Syria, Marianne Gasser.

Medecins Sans Frontieres (MSF) has warned that fighting in Azaz, near the Turkish border, has left health systems “close to collapse”.

New arrivals from the fighting have been forced to seek shelter in already thinly-stretched refugee camps, according to the charity.

“There is a risk that people, including young children and the elderly, could be stuck living in the open in freezing conditions, for several days at least,” said MSF’s Muskilda Zancada.

Turkey has already taken in more than 2.5 million Syrian refugees over the past five years and says it will continue to do so in a “controlled fashion”.

Up to 300,000 could be cut off from aid if the offensive by Syrian government forces and Iranian-backed militias encircles Aleppo, the UN has said.

More than 500 people, including dozens of civilians, have been killed since the assault began at the start of the month, according to the Syrian Observatory for Human Rights monitoring group.

Elsewhere, Kurdish fighters had expelled other anti-government rebels from the Minnigh air base, in northern Syria, the Observatory told the AFP agency.

At the UN Security Council on Wednesday, world powers again urged Russia to stop carrying out air strikes in support of ally Syria.

“The [Syrian] regime and its allies cannot pretend they are extending a hand to the opposition while with their other hand they are trying to destroy them,” France’s UN ambassador Francois Delattre told reporters.

But Russian ambassador Vitaly Churkin said his country was not about to be “apologetic” for its actions.

He accused other Security Council members of exploiting the humanitarian situation for their own political gain.

Russia says its strikes target what it calls terrorists, but Western powers say they have been used against opposition groups fighting the Syrian government.