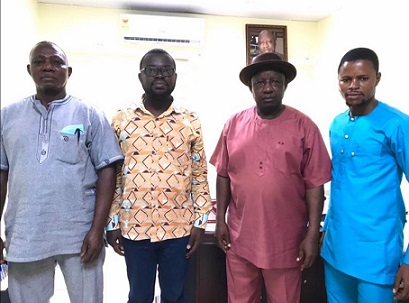 The General Secretary of the Ghana Private Road Transport Union (GPRTU), Godfred Abulbire Adogma has charged members of the Coalition of Concerned Journalists and Social Activists Against Road Crashes (COCJASAARC) to be steadfast, united in their actions, and vigorously campaign to promote road safety at all cost in a bid to help save lives.

According to him, the rampant incidences of road traffic crashes, fatalities, and injuries being recorded in high proportions in recent times are a major cause of worry to all Ghanaians particularly the GPRTU hence the need to have all hands on decks to stop it.

He made the plea while engaging a delegation from a road safety advocacy group known as the Coalition of Concerned Journalists and Social Activists Against Road Crashes (COCJASAARC) who paid a courtesy call on him at his office on Tuesday, November 29, 2021.

The delegation was led by Mr. Joseph Wemakor, the Co-convener of the Coalition of Concerned Journalists and Social Activists against Road Crashes (COCJASAARC) who outlined the motive behind the group’s visit.

According to him, the purpose was to brief them on the organization’s vision, mission and objectives, as well as other general background information.

He indicated the visit was equally aimed at soliciting the support of GPRTU, having identified it as a key stakeholder in the roads and transport sector to enhance successful implementation of COCJASAARC’s agenda.

Mr. Wemakor averred that the COCJASAARC is on the rescue mission to complement gov’t effort in a bid to help reduce carnages on our roads to the barest minimum and if possible end them.

This, he explained, would be achieved through a road safety campaign which his outfit would soon be embarking upon to strongly advocate and raise a deeper public awareness about the need to take precautions and adhere strictly to the road safety regulations while on roads with the aim of saving lives.

He observed the campaign dubbed: ‘STOP ROAD CRASHES, SAVE LIVES’ would see the general public engaged particularly motorists including other road users at various lorry stations/ parks, market places and religious settings before, during and after the yuletide season to drum down the message on road safety in order to make an impact.

The project, he hinted, is aimed at raising awareness on road safety and ensuring a culture of discipline among road users before, during and after the yuletide season to help reduce incidence of road traffic crashes, fatalities and injuries on our roads.

For his part, Mr. Godfred Adogma lauded the Coalition for their desire to help promote road safety and ensure the old canker is completely defeated.

He lamented that the troubling situation has become a nightmare, often putting so much fear in passengers each time they are making choices of transport as a means for travel even in the face of no alternatives.

While blaming behavioural change, lack of compliance of safety regulations among the motorists and other road users coupled with the lack of enforcement the law on part of the regulators as the major cause of road crashes, he revealed:

“People are now afraid to patronize our services as the only obvious means of transport when traveling because it is not safe”.

“So we’ll need your support as an activist’s group promoting road safety to support our efforts and strongly advocate to ensure our roads become a safe place for us all”, Mr. Adogma said while welcoming the Coalition on board.

The GPRTU General Secretary who equally described the move as a good motive on part of the Coalition said he is optimistic the initiative would yield a positive result.

“So I think it’s a very big task that you have chosen for yourselves to do but the beauty of it all is that you’re all advocates, you’re all journalists and all the people do listen to you on a daily basis”, he indicated.

It’s effects have been felt by almost every citizen one way or the other including the loss of close relatives, financial demands for seeking treatments, the nation losing quality human resources and more. Statistics available are disturbing and evidently shocking.

According to Statista.com, between the period of January to October 2021 alone, Ghana recorded a total of 12,100 motor vehicular accidents involving 20,400 vehicles. Injuries stood at 12,380, with total fatalities within the same period being 2,080 as compared to around 1,207 deaths recorded since the inception of COVID-19 global pandemic, per the Ghana Health Service report.

COCJASAARC is a network spanning over sixty (60) media and civil society organizations comprising journalists and social activists committed to promotion of road safety in Ghana.