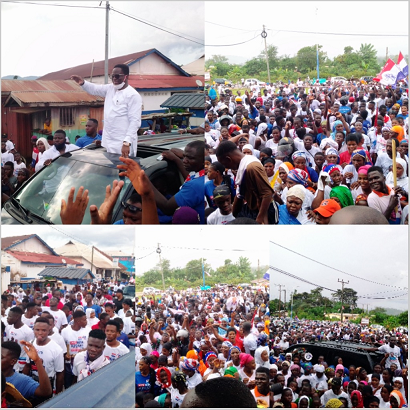 Supporters of the New Patriotic Party (NPP), defied a downpour to witness the filing of parliamentary nomination of the party’s Parliamentary Candidate (PC).

The supporters made up Hohoe Okada Riders Association, Zongo Youth for Amewu, and other groups from the traditional areas in the Constituency, chanted ‘four more for Nana to do more’, ‘Johnny for Hohoe’ among others, while they waited for an address from their candidate.

Mr John-Peter Amewu, the PC in an address to the teeming supporters, expressed gratitude to them, the traditional leaders as well as the youth in the Hohoe Constituency, who deemed it necessary to accompany him.

“The crowd alone showed it, I think history was about to be made, and the people were excited taking into consideration the numerous development projects that they have witnessed during the near four years of the NPP administration.

He said “there is victory coming to Hohoe Constituency and you must be part of this history. The parliamentary seat is not a traditional stool for any but a seat for Hohoe and not for any stranger and the power to choose who sits on it belongs to you the electorate.

“They told you, I am good and qualified to go to heaven so let them know that I will have to go to heaven through Parliament. I am sure you have all witnessed the developmental project, so, I urge you to on December 7, vote massively for me and the NPP.”

Mr Amewu said he was the only solution to all the years of suffering and wanted the electorate to be part of the new Hohoe.

Mr Enoch Danso Agyekum, the Hohoe Municipal Electoral Officer, said the Electoral Commission (EC) was well prepared to conduct an incident-free, fair, credible, and transparent election, which would be acceptable by all the contestants.

Mr Fredoline Bansah, a National Democratic Congress (NDC) founding member in the Constituency, said he was thinking of preaching skirt and blouse but “having seen what the NPP and Amewu were doing,” he had decided to campaign for an individual instead of a party symbol.

“I have been in the party since 1992. The works Amewu has done within four years for the Constituency remain unmatched. The NDC has never done any and cannot do any even if they stay in power forever.”

He urged all electorates in the Constituency to vote for the NPP and John-Peter Amewu to represent them in Parliament for more development projects.

NPP belongs to no individual, we must plan and progress in unity – Amewu