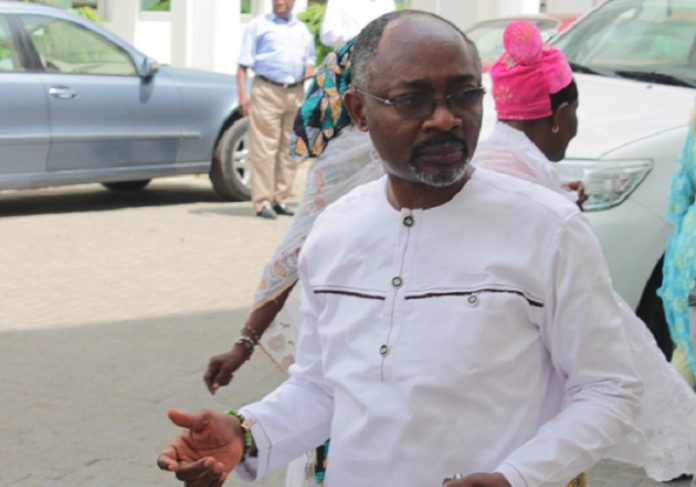 The Supreme Court(SC)on Wednesday put on hold a fresh writ filed at the General Jurisdiction (High Court Division) in which Woyome is contending that his fundamental human rights was being breached.

It noted that Woyome could not initiate a fresh action at the trial court (High Court) when the matter was before an SC which is an “execution court.”

It directed Mr. Osafo Buabeng, counsel who represented Woyome in Court to take steps to have the action stayed.

The five member panel presided over by Chief Justice Anin Yeboah’s action came after it had struck out the Attorney General application for leave for acquisition of Woyome’s properties.

The Attorney General came under the High Court Civil Procedure Code (CI 47) to acquire Woyome’s properties, but the SC said that it was unnecessary to come under that rule.

According to the Court, the state could mobilize funds and buy Woyome’s properties before handing them over to any state institution.

Mr. Godred Yeboah Dame, a Deputy Attorney General, therefore withdrew the application for leave for acquisition and the SC struck it out as withdrawn.

The motion for leave of the court by the Attorney General was based on the fact that auctioneers were unable to sell the properties because of the fear that they could be returned to him in case there is a change in government.

The AG is therefore praying the court to have Woyome’s property transferred to the National Security.

Woyome owes the state about GHC47.2 million and the sale of his properties was to settle his indebtedness.

On July 29, 2014, the court ordered Woyome to refund GHC51.2 million on basis that he obtained the money through invalid contracts between the state and Waterville Holdings Limited in the year 2016.

However the sale of Woyome’s properties has not been materialized.

Mr. Albert Kan-Dapaah, National Security Minister, made this known in a letter dated March 4, this year and addressed to the Minister of Justice and Attorney General.

The letter made reference to the Supreme Court’s order to have the properties of Mr. Woyome auctioned to settle judgment debt.

The assets in question included two mansions at Trassaco Estate, a house at Kpehe where he resides, an office complex of Anator Holdings, residential building at Abelemkpe and a stone quarry in the Eastern Region including its plants and equipment.