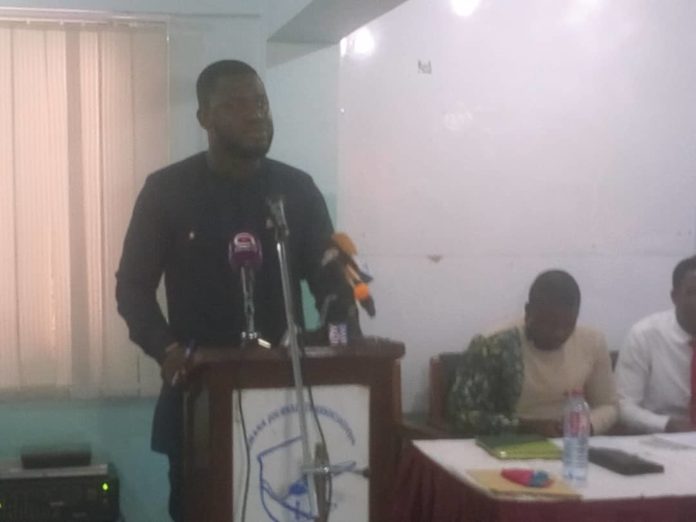 The Graduate Students Association of Ghana (GRASAG) together with other student unions have called on Government to ensure that public officials who benefitted from the scholarship of Ghana Education Trust Fund (GETFund) award scheme be surcharged, prosecuted and sanctioned as per the laws of the country.

The student’s body wants both the past and present officials beneficiaries to face the law to allow sanity to reign in the scheme.

This was said at a press conference organized by the student’s bodies to express their displeasure over the abuse of the scheme by some public officials in Accra.

The President of GRASAG, Samuel Sagoe expressed their shock and amazement about the deafening silence of government over the Auditor General’s report on officials of the present and past government who directly benefited from scholarship from GETFund.

” So long as these Article 71 office holders, well-resourced lecturers and other public office holders are not needy but applied for scholarship and given same constitutes an abuse of the discretionary powers by the Board of GETFund”, he said.

According to the President, though it is established that, the award of scholarships in general does not necessarily mean the recipient must be needy, however, one key objectives of setting up the scheme was to provide financial support (scholarship) for needy students as stated by the Section 2 (2b) of Act 581.

Samuel Sagoe indicated that Section 2, Clause (2b) of the Act states that, “GETFund is to provide supplementary funding to the Scholarship Secretariat for the grant of scholarships of gifted but needy students for studies in the second cycle and accredited tertiary institutions in Ghana”.

” It is therefore explicit that GETFund cannot go into the business of retail award of scholarships in Ghana. That is the job solely preserved for the scholarship secretariat of Ghana. So for GETFund to attempt to award scholarships, in the first place, ultra vires its mandate”, he further lamented.

He further noted that it is most worrying that even though the Secretariat attempted to award the scholarships, the Auditor General report revealed GETFund failed to establish any systems, policies and procedures to ensure economic, efficient and effective use of public funds from 2012 to 2018.

” And so, there is enormous evidence that many brilliant but poor students are denied scholarships because they lack political connections”, he bemoaned.

He again mentioned that it’s unconscionable for certain Members of Parliament (MP’s) and other public officials to consider themselves as needy students, adding that “its akin to a worker of a firm attempting to enjoy some of the Christmas donation meant for poor widows because he too considers himself as poor”.

“This is the evidence of impunity with which the political class and the elite in the society have carefully been orchestrating against the masses in this country”, he angrily said.

He also added that some of the beneficiaries failed to go through any robust competitive selection process before receiving the scholarships and therefore demanded a refund of the amount spent on them.

The student’s bodies again called on the Attorney General and the office of the Special Prosecutor to investigate circumstances that resulted in this malicious abuse of office by these public officials.

“We also call for the prosecution and sanction of public officials both past and present who abused their powers and shared scholarships meant for brilliant but needy students among the political class, the elite and the affluent in the society”,

” At this point, the Students of Ghana stand by the recommendations of the Auditor General for GETFund to abide by Section 2 (2b) of the GETFund Act and give funds to Scholarships Secretariat for the administration of local scholarships and desist from administering foreign scholarships”, he stated.

Registrar Of Companies’ Commended For Supporting Fight Against Corruption