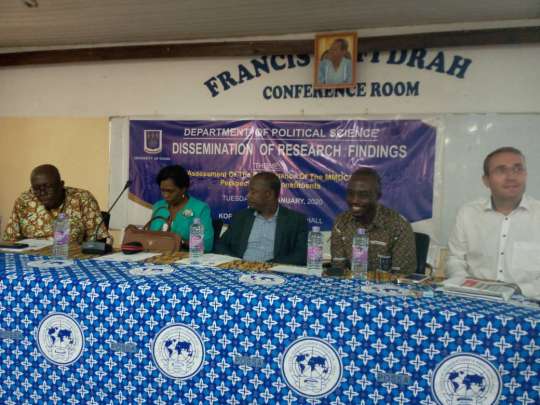 Metropolitan, Municipal, and District Chief Executives (MMDCEs) were on Tuesday tasked to strike a delicate balance with their relationship with local and external parties particularly Chiefs and Members of Parliament (MPs) in order to succeed.

MMDCEs must also improve their interaction with their communities for the delivery of public goods, a survey conducted by the Political Science Department of the University of Ghana has recommmended.

The survey also identified irregular interaction between the MMDCEs in their communities as a worrying situation.

Additionally, the acrimonies between MMDCE’s and MPs for the delivery of public goods ought to be resolved to avert the stifling of sustainable local development.

The survey also revealed that Party Constituency Chairpersons, were seen as the most influential on the MMDCEs with Chiefs having cordial relationship with MMDCEs.

The research conducted in 2017 and 2019 saw 27,500 respondents answering questions in relation to the appointment of MMDCEs, MMDCEs and influential Actors, Members of Parliament, Communities and developmental projects, Performance of MMDCEs and 2020 Presidential Elections among others.

The survey which conducted in 275 Constituencies was on the theme: “Assessment of the Performance of MMDCE’s from the Perspective of the Constituents.”
The survey which also sought to ascertain popular opinions of MMDCEs Nationwide was funded by Konrad Adenauer Stiftung, a German-based political foundation.

Mr. Kaakyire Frimpong, a Senior Lecturer of the Department and one of the Researchers noted that, as a representatives of the President, MMDCEs were expected to travel to their constituents in other to ease the problem of “remoteness of the local people from the central government”.

Mr Frimpong who is also a Senior Lecturer said the proximity of MMDCEs to the people is one of the deliberate strategy to assuage the people’s fear that the center has not neglected them in terms of decision making.

He recounted that MMDCEs’ regular visits to the communities were therefore meant to ease psychological and emotional burdens of the people in addition to see to their socio-economic welfare.

The Senior Lecturer said the survey indicated that MMDCEs did not frequently visit their communities to obtain firsthand information and attend to their welfare matters or concerns.

He said almost half of the respondents denounced their MMDCEs for their inability to bring development to their localities.

According to him 15.5 per cent of the respondent indicated they did not know of the development projects the MMDCEs have undertaken in their localities

Critical social infrastructure such as markets (4.3 per cent), roads (6.5 per cent) and schools (10.1 per cent) have received little attention.

The picture of low development is a reflection of the poor performance of the MMDCEs, only 2.4 per cent rated their MMDCEs in the delivery of community development projects as excellent; 6.3 per cent ‘very good’ and 24.6 per cent as ‘good’ a cumulative score of 33.3 per cent.

However, he said the question as to whether the performance of MMDCEs would affect the people’s choices in the 2020 Presidential poll, a little over half (51.0 per cent) said they would not link their choice of the president to the failures of the MMDCEs.

“But that should not give much comfort to the ruling party, given that a significant minority (39.9 per cent) said they would use the performance of the MMDCEs as proxy for the achievement of the President in the locality,” he added.

He explained that evidence from the survey showed that majority supported non-partisan choice of MMDCEs and assembly members.

He explained that the views expressed by the respondents in the study might have been influenced by the confusion that surrounded the referendum processes and the lack of education which led to the withdrawal of the Bills.

Mr. Frimpong said it was a worrying development that after decades of practicing the current local government system in Ghana, less than a fifth of the respondents could not answer the basic issue of mode of appointment of the MMDCE correctly.

He said similarly for several of the other questions in the survey, a large chunk of respondents, usually more than 40 per cent expressed lack of knowledge towards local governance which is closest to the people.

There is the urgent need for the MMDAs, the NCCE, the media and other stakeholders to embark on intensive education to reverse this trend, he stressed.

Professor Emmanuel Debrah, Director of Center for International Affairs and Diplomacy noted that the survey was not based on speculation but they are realities on the ground.

Professor Debrah urged stakeholders to take note of the lessons drawn out of the survey seriously.

Dr Maame Gyekye-Jandoh, Head of Political Science Department said the survey which threw more light on local administration was going to help local development and political participation of the people at the grassroots.